A billboard in Loughborough Junction unveiled this morning (29 March) is part of a campaign to hasten the disappearance of diesel cars from London Roads.

Organisers said research shows that drivers in London have abandoned diesel cars six times faster than those in the rest of the UK.

But they add that further action is needed by councillors and candidates in forthcoming local elections and are calling on all candidates to back their campaign – which Lambeth’s ruling Labour party did this morning.

Mums for Lungs and the Clean Cities Campaign are calling for councils to stop issuing new permits for diesel cars from next year, with an exemption for Blue Badge holders.

This would not affect residents who already have a diesel car. Their permits would continue to be honoured.

However, say the campaigners, “It will discourage any more diesel cars being brought to London”.

A coalition of 28 campaign groups brought together by Mums for Lungs and Clean Cities have signed a declaration urging candidates in council elections in May to commit to cleaning up London’s toxic air, including phasing out diesel cars.

The #CleanAirWins campaign says it will put a positive and upbeat case for action on clean air, demonstrating the popularity of such policies, organisers said.

Research published by the campaign shows that, while progress has been made in reducing diesel fumes, there is still some way to go.

Across London, diesel cars still cause three times as much pollution as HGVs. More than a third (35%) of deadly road transport nitrogen oxide emissions are from diesel and petrol cars in Lambeth.

Pollution from diesel cars contributes to the deaths of 8.8 million people worldwide, including 4,000 in London. It stunts children’s lungs for life and triggers conditions from asthma to heart disease.

As well as calling on every borough to completely phase out all diesel car parking permits by 2030, campaigners want car parking to take emissions into account by 2023, with controlled parking zones in every part of the capital.

Jemima Hartshorn, a parent who lives in Herne Hill and organises the Mums for Lungs group said: “We are on the cusp of something historic with the end of diesel fumes. But we won’t get there without local leadership from councillors and candidates. Let’s make polluting cars a distant memory.”

She said it was absurd that cars were still being supported more than other forms of transport. “In this ward,” she said at the poster launch, “not many people own cars.”

All four major parties contesting the election in Lambeth were contacted by the campaign, which said it is waiting to hear from the others.

The Loughborough billboard is one of six to be on display for two weeks in Lambeth and Wandsworth to celebrate “The End of Diesel Fumes”.

Organisers said the artwork for the billboards highlights the upbeat nature of the campaign, echoing a music festival poster, and featuring the names of schools in the two boroughs that can celebrate the potential for cleaner air.

Mums for Lungs is organising a webinar at 8pm today to discuss air pollution targets at a crucial moment for clean air in the UK. 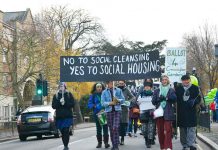