I live not far from Big Ben and Westminster, so filming the BLM march from my window was an unforgettable moment, as was speaking to local people in the demonstration.

Clapping and cheering, encouraging and thanking them for doing it was truly moving.

Lissy Reid was born in East Dulwich and has lived there all her life. She and her friend Ruby Shaw met at The Charter School in North Dulwich

Ruby said: “I don’t know whether Lissy will remember, but I asked her if I could borrow a ruler in our first maths class in Year 7, so we have known each other for 10 years which seems so crazy, but we really have grown up together.”

“Standing outside the actual station where Belly Mujinga worked and holding a one-minute silence for her was very powerful,” said Lissy.

“Seeing so many people with so many different ethnicities – it was such a powerful reminder of how diverse and amazing London is,” said Ruby. 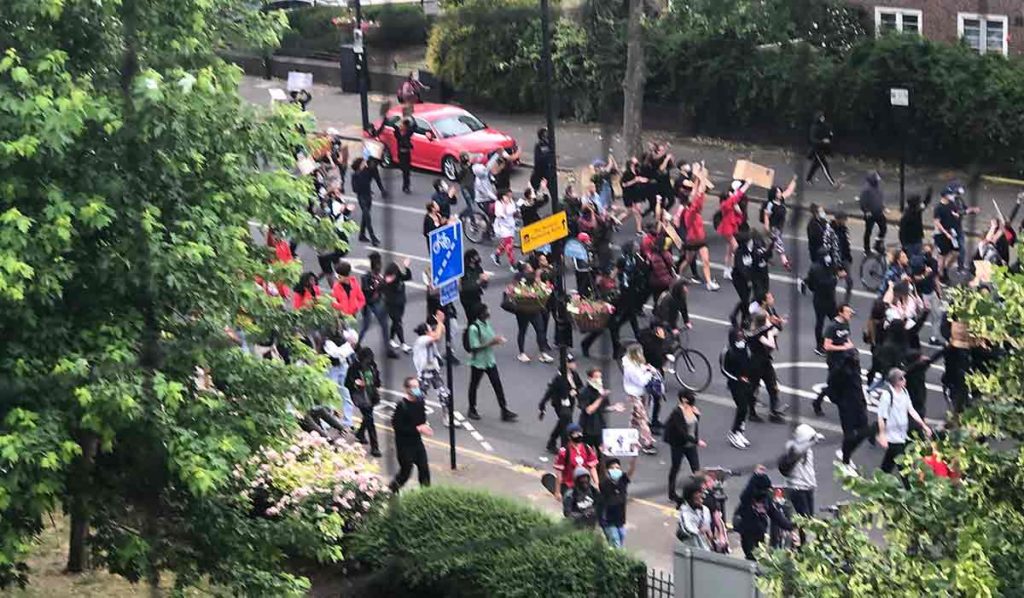 Both women have lived through the lockdown while at university. Lissy was at the University of Sussex, gaining a degree in human geography and was disappointed she did not get to celebrate the end of uni properly, saying: “I missed attending lectures, seminars and getting my education to the fullest extent as well as seeing my friends and socialising,” she said.

Lissy, whose family has Trinidadian, Barbadian and British heritage, felt anxious and worried about the virus before the march, but joined and kept her distance.

“There was definitely a sense of affinity between races and cultures, which often represents London in itself,” she said.

“The majority of the crowd were also young people, which is hopeful as it feels we could be the generation to make the changes.’’

Ruth is in her second year at the University of Sheffield studying landscape architecture.

“I came home two weeks before lockdown to isolate with my family,” she said.

“It has been difficult adapting to not only living back at home, but also working from home. My course is very studio-based and I’m missing making models and experimenting there.’’

Both will be emailing their local MP to demand justice for Belly.

“There also needs to be pressure put on local MPs to decolonise our current education system so we are all better informed of multicultural history from a young age,” said Lissy.

Jade Willis lives in central Brixton. He told me: “I am so proud of the young Londoners. It was extremely diverse and I am bowled over by that and overwhelmed because that is what we need to happen in order to push that message with that agenda.

“To see that many young Black kids made me cry,” he said because some of them had never taken part in anything like that before.

Clapham Omnibus marks the 30th anniversary of the killings in Tiananmen...

Growing for your community