Inspired by “brandalism” the young activists recreated famous film and TV posters with Black actors, recruiting friends and family for the photoshoot.

They were paired together based on their campaign visions.

“It helps young people to turn our cold anger about injustices in the world into political activism,” says Shiden. 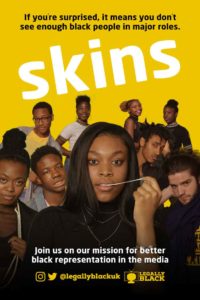 A British Film Institute study found that Black actors played 0.5% of roles in British films released between 2006 and 2016.

The 2011 UK census put the proportion of Britons who are Black at 3%.

“We all thought Black media representation needed to be dealt with,” says Kofi. “For me, it was the way that we are constantly being portrayed or labelled as violent, angry or criminal.

Shiden: “For me it was racism and colourism.”

They wanted to get the posters on buses but did not have the contacts to facilitate it.

Special Patrol Group, a subversive advertising group, found them online and put their posters up on bus stop billboards in Brixton on 28 February.

They were up for less than a day but in that time spread all over social media.

“The response was amazing,” says Belmiro. “One of the first people that tweeted the posters got 17,000 retweets.

“Filmmakers are inviting us to their premieres,: says Shiden. “Actors want to get involved in Legally Black. I feel like they think we’re a massive organisation. They don’t know we’re four teenagers from South London who go to school.

In March, they met shadow foreign secretary Diane Abbott – who was the first Black woman MP in 1987. She told them about an awards ceremony she attended. A journalist asked her if any of the young people nominated were in gangs. Abbott said “no” and the journalist left.

Shiden: “If you challenge the image of what a specific group looks like people feel threatened.”

Belmiro: “People say that Black doesn’t sell but if you look at the success of Black Panther, one of the few films with a proper Black narrative, it’s ridiculous. We want to ensure that can happen in the UK as well.

Shiden: “Our goal is to speak to commissioners and increase the number of films and TV with black narratives.

“We have a meeting with commissioners and film producers at Channel 4 to get something going.”

They four graduated from Advocacy Academy the day after the posters went up.

“We were emotional, but you don’t really leave because they invite you back for meetings and residencies,” says Shiden. 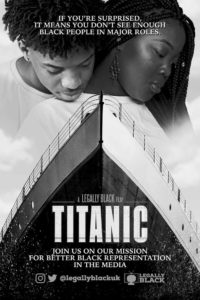 Legally Black will this month deliver sessions on race and diversity at the British Film Institute to National Film and Television School scholars, of whom one in four are BAME and more than half female.

“Not having role models makes it difficult to have a sense of worth and a link between your culture and who you are as a Black person in society,” says Kofi, who will be studying law at university.

He performed as Prospero in The Tempest at the Shakespeare Festival and wants to continue to pursue acting at university.

Months away from moving to different universities, will Legally Black continue?”

Shiden: “We’ve come so far. Why would we stop?”

Kofi: “This is just the beginning. Not everyone has the platform we have been given. To have that opportunity and not use it would be a waste.