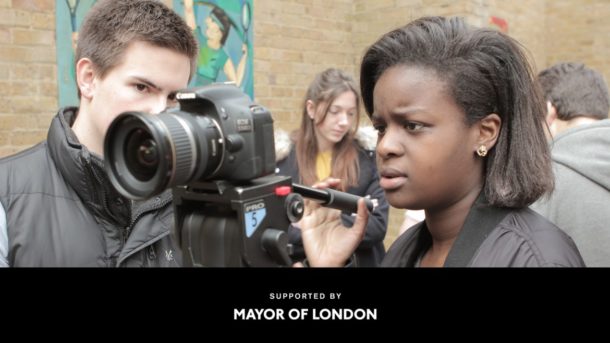 Film education charity, Into Film, has launched a My Local Culture Filmmaking Competition for young Londoners in partnership with the Mayor of London’s London Borough of Culture bid. It offers the chance for young Londoners, of primary and secondary school ages, to win filmmaking equipment and film mentoring by industry professionals, by making a short film (up to 3 mins) on their phone or tablet celebrating which London Borough is best.

Speaking at the launch yesterday (23 November) Mayor of London Sadiq Khan said: “Culture is in the DNA of our city. It has the power to transform communities and bring people closer together – that’s what London Borough of Culture is all about. This is a great chance for young Londoners to tell us what they love about their local area, and why they think their borough should be London Borough of Culture. I can’t wait to see the results of this fantastic initiative. Good luck to everyone taking part.”

Lambeth is bidding to be the London Borough of Culture and the closing date for submissions is 1 December. Details of the bid were reported in the Bugle and Blog in October. More information here. Only two boroughs will be selected, one taking up the title in 2019 and the other in 2020.

There are two age categories: 12 and under, and 13 and over. Each winning filmmaker (or group of filmmakers) will win £1500 of state-of-the-art filmmaking equipment and receive professional training that could be the first step on a path to a career in the British film industry.

Entries will be judged by a special panel including staff from Into Film, the Mayor’s office and other young people, and will be assessed on idea, sound, story and look, as well as the technical ability on display.

if you are 17 and under and want to submit your film, a parent or guardian will need to provide their details to give consent for you to participate. If you submit your film without these details, it will be disqualified.

You can see Into Film top tips for young makers here.

The London Borough of Culture and Into Film filmmaking competition winners will be announced by the Mayor in February 2018 and all entrants to the competition will be eligible for inclusion to the national Into Film Awards in March. The closing date for entries is 31 January 2018.

For further information and details of how to enter the competition:  Intofilm.org/Intomylocalculture

Help Lambeth to win the London Borough of Culture bid by pledging your support at www.ourlambeth.london and by spreading the word by using both #OurLambeth and #MyLocalCulture to say what you love about Lambeth.