Brixton’s Ritzy cinema was closed yesterday and will be again today (5 August) as its staff continue their fight to be paid the London living wage and for sacked union reps to be reinstated.

The increasing national significance of their campaign has included protests in Glasgow and more discussion of its key role in current politics. Local MP Helen Hayes and shadow chancellor John McDonnell have joined protests outside the Ritzy and 36 MPs from the Labour, Scottish National and Green parties have backed a House of Commons motion drawing attention to the dispute, 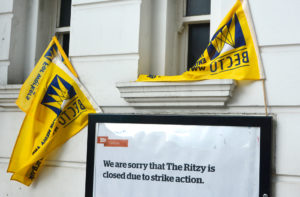 Workers from other Picturehouse cinemas – the  Central, Crouch End,  East Dulwich and Hackney Picturehouses are also striking and picketing.

Current strikes will bring the total number of stoppages since September last year to near 60. The dispute, which seeks to get the profitable Picturehouse chain owned by Cineworld, to pay the living wage – currently £9.75 in London and £8.45 outside London – is also supported by union members at the Duke of York’s in Brighton. Support for the dispute is spreading to other Picturehouse venues.

The action comes ahead of a tribunal hearing in London on Thursday (10 August) to hear claims for “interim relief” on behalf of the three BECTU trade union representatives from the Ritzy cinema who were sacked  in June. BECTU maintains that the dismissals amount to victimisation for trade union activities and is demanding that all three be reinstated.

Background to the dispute.

The Ritzy Strike’s Back