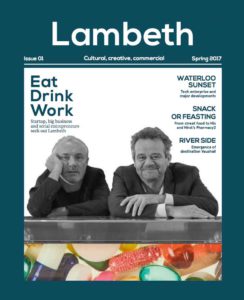 A Croydon-based company that specialises in marketing to attract “investment for regeneration” has launched a new magazine and website devoted solely to Lambeth.

3Fox International has worked for Southwark council since 2004.

The magazine, which is full of advertising from developers, has at least one interesting error. It sites the proposed giant Bowie flash sculpture in the musician’s birthplace of Stansfield Road, rather than the actual site of Tunstall Road, a quarter of a mile away.

Of Brixton, it says: “Two major landowners, Lambeth council and Network Rail, have been working on long-term plans for the area that takes [sic] in several of Brixton’s major landmarks: the former ice rink, the train station, Brixton Station Road, and the land in between Valentia Place.”

It says the council is looking for investors to “take on” its International House building in central Brixton.

An article does mention concern about gentrification, but goes on to big up the Ritzy cinema and its café’s “affluent” customers without mentioning its workers’ campaign for a living wage that has attracted worldwide attention.

The publisher says: “Our job is to promote big development schemes, to raise the profile of the places in which they’re happening, to demonstrate the delivery of jobs and homes by the planning authority and to showcase the expertise and effectiveness of the development partners involved.”

It funds its work “by sharing the costs between the development partners, so that the council contributes 5% or less of the total”.

The first issue of Lambeth magazine was presented at the global property conference MIPIM in Cannes earlier this month. At an event organised by 3Fox, Lambeth council’s Sandra Roebuck, assistant director of neighbourhoods and investment, joined Marcus Bate, investment director of luxury homes developer Mount Anvil and Phil Botes of Bourne Capital – a property and leisure developer dedicated to maximising “short, medium and long term revenues”  –  to discuss development and regeneration in the borough and the opportunities the council intends to “unlock”.

The Southwark community website londonse1 has an audio recording of the meeting.

The magazine’s website has interactive maps to help potential investors identify areas where residential, commercial and employment space is “being created”, along with the location of the sites for which developers are sought. These do not include the Cressingham Gardens estate that the council intends to demolish.

A quarterly email bulletin will offer subscribers updates from the website.

Emotions run high at Another Lambeth