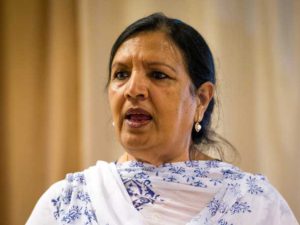 The Mayor of Lambeth, Cllr Saleha Jaffer, who was appointed in April has officially announced she will be fundraising for two charities that prioritise community relations and support refugees, during her time in office, writes Colette Webber.

Her chosen charities are Families Against Stress and Trauma (Fast) and Streatham Drop-In Centre for Refugees and Asylum Seekers, something she feels strongly about.

FAST is a charity focusing on families who have been affected by a relative travelling to a conflict zone, for example the trauma of a child joining ISIS or another radical group overseas.

The Streatham Drop-In Centre for Refugees and Asylum Seekers offers practical support and advice for people arriving in the UK with a specialist advice for those who have fled war, abuse or torture. It is a centre where people can go to help rebuild what they have lost.

“These are increasingly uncertain times with the number of refugees increasing worldwide and a level of uncertainly following the EU referendum outcome. Maintaining community cohesion has never been more important.

“I’m determined that both London and our borough remain open and tolerant, which is why I have chosen to back charities that support this goal.”