And they warned that there is more violence among young people in Lambeth than in similar boroughs.

In a letter, they said there had been an 8.9% increase in recorded “violence with injury” crimes from April last year to January this year in Lambeth. There were 13 separate stabbing incidents recently in just two weeks – with most involving school-age children – as well as several shootings involving young men,” said the letter.

“Youth violence has increased significantly in Lambeth in the past year. There is now a definite trend with more recorded ‘violence with injury’ crimes here than in similar boroughs,” it said.

“We have recently seen a significant spike in youth violence in Lambeth.

“However, we believe with the right partnership between the Met, the local authority and grassroots organisations, we can begin the process of breaking communities free from the cycle of violence.”

The Met said that evidence suggested its activity on knife crime was “having a real impact”. It said the number of young people injured by knives had been up by 22 per cent in June 2015 but had been steadily decreasing since then.

The Met’s borough commander for Lambeth, Richard Wood, said: “I am determined that we will do all we can to keep our young people safe.

“I was deeply troubled by the recent spate of violent crime, but reassured by the joint response from a number of agencies, including the local authority, to take whatever legitimate steps we can to deal with this and to identify long-term solutions to some of these very real issues.” 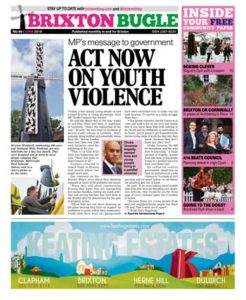 Streatham MP Chuka Umunna recently told the Brixton Blog and Bugle that some young people in the area are living in “a parallel universe” and criticised national government for not doing enough to tackle violence among young people.

Lambeth was one of three boroughs trialling the “Operation Shield” of the Boris Johnson mayorality.

Designed to tackle gang violence, it was criticised for being under-funded and using measures that would undermine community trust in authorities as well as risking police misuse of draconian powers that they would have under the scheme.

Both Lambeth and Haringey stepped back from the trial.

The letter to the deputy mayor said: “We want the GLA to take youth violence seriously by setting up a team (alongside the Met’s Trident taskforce) that works with local authorities and grassroots organisations in a cross-London effort to reduce youth violence, with successful intervention for those at risk.

“The Shield programme should be used as a ‘lessons learned’ exercise but not abandoned entirely.”

Replying to the letter, Sophie Linden said: “Every teenage death or serious injury is an utter tragedy. As parents, the rise in violent crime amongst our young people is deeply concerning to the mayor and me, and it’s vital we act to tackle this blight on the lives of some of our city’s most vulnerable young people. When it comes to violent youth crime, enforcement alone is not enough.

“That’s why we will be working with the Met, the criminal justice system, local authorities, schools, youth services and community organisations to identify and engage with young people at risk of being caught up in violence, and help protect them from making bad, potentially life-threatening choices.

“We will also be pushing for tougher community payback in addition to jail time for those caught with knives, as well as proper enforcement of the laws that prohibit the sale of knives to children and devolution of more powers over youth justice, probation and courts.”

The signatories of the letter are: