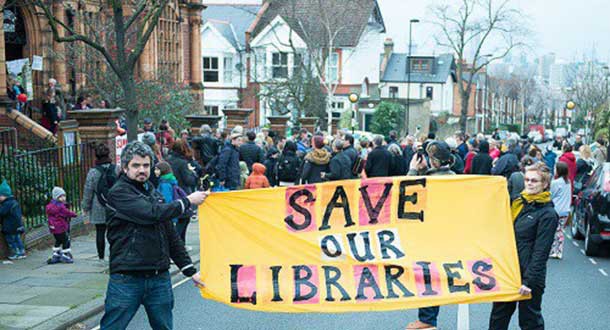 Lambeth council has revealed minor changes to plans for its 10 libraries, which had included turning three of them into gyms, the day before opponents will demonstrate against the plans.

The council said: “A four-week consultation on the proposals for Tate South Lambeth in South Lambeth Road becoming a healthy living centre and Durning Library in Kennington becoming a town centre library has now concluded and, having listened to people, the council recognises the desire to keep these libraries open.

This is the only change to the plans agreed by the council in October this year.

Town centre libraries in Brixton, Streatham, West Norwood and Clapham, which account for the majority of library usage in the borough, will remain open and the  council will continue to fund Upper Norwood Joint Library jointly with Croydon Council.

The library service in Waterloo will be moved from its current location to the nearby Oasis Centre.

Proposals for a “staff mutual” organisation to run the 10 libraries – an idea which has proved a success in York libraries – has been turned down.

As part of a review resulting from the council’s overview and scrutiny committee asking if a proposal for a staff mutual could be considered again, library managers were asked to provide an updated proposal, backed by £10,000 of council funds.

A panel led by the council’s strategic director for corporate resources, who was not involved in the Culture 2020 consultation, and including an expert from the independent agency Mutual Ventures which was involved in setting up a staff mutual system for York, as well as council legal and finance officers evaluated the proposal.

The council said the panel’s assessment found that, while the mutual proposal contained “some good proposals for service improvements”, there was not a business plan in place that could deliver the significant savings required by 1 April 2016.

The council said the proposal did not address in detail questions about the transfer of legal responsibilities, staff terms and conditions or how it could generate more income.

“It was not a viable plan that could deliver the savings required within the next 12–18months,” said the council.

The council confirmed that it will turn both the Carnegie and the Minet libraries into gyms run by its leisure provider, Greenwich Leisure Limited.

‘Never seen anything so stupid’

Laura Swaffield, chair of Friends of Lambeth Libraries, said: “I am also chair of national charity The Library Campaign, which supports those who support libraries. I get reports from all over the UK. I see many examples of unworkable plans, or pig-headed councils.

“But Lambeth is unique. It is the only council in the entire UK that is paying far more to destroy its libraries than it would spend on saving them.

“I have never seen anything as stupid as this.

“The council is smashing up an essential front-line service and making itself hugely unpopular – and paying through the nose to do so.”