Brixton’s Karibu Centre hosted an all-London meeting of 200 supporters of the left-wing Momentum movement at the weekend, Catriona Lischka reports

Workshops and keynote speeches discussed why the economy isn’t working; the causes of the housing crisis; and strategies for fighting cuts to local services.

A session on “myth-busting” addressed the fanciful idea that the 2008 financial crisis was caused by Labour government overspending.

Richard Gerrard of Southwark Labour Party pointed out that the biggest spike in UK government debt coincided with the massive drop in GDP that occurred in the period 2008-10.

In other words, he said, the increase in government debt was the product, not the cause of the economic crisis, he said.

He called for massive government investment in housing, infrastructure and higher education to put the economy back to work.

Former Lambeth council leader (1978–1986), 82-year-old Ted Knight, who was barred from office by an earlier Conservative government, received rapturous applause when he called for a campaign to mobilise the workers and trade unionists of Lambeth to oppose the Labour council’s proposed cuts to local services. “A Labour cut,” he said, “is no better than a Tory cut. Any cut is wrong.”

Activist Janine Booth outlined the 1921 Poplar Rates Rebellion which saw dozens of Labour councillors banged up in Brixton prison for contempt of court. It was led by the Poplar’s former mayor, Edward Lansbury, who went on to become Labour leader.

A final session looked at causes of the housing crisis, including the sale of council houses and the abolition of rent controls.

Momentum is a network of people and organisations to continue the energy and enthusiasm of Jeremy Corbyn’s campaign for the leadership of the Labour Party. 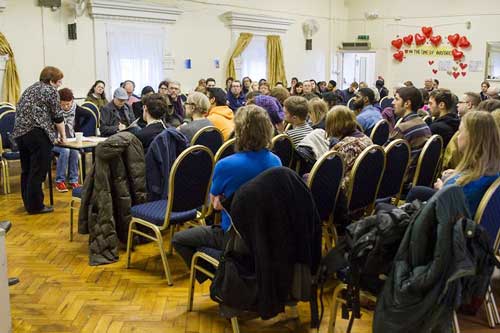