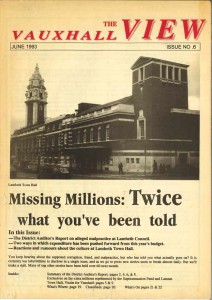 In the nineties Lambeth Council was in much need of a major shake-up and a key player in this transformation was The Vauxhall View.

As the front cover of this issue shows, the View soon extended beyond Vauxhall to cover Brixton issues. It was a monthly magazine which was first published in 1993 and ran for 33 issues until it suddenly closed down in 1998. The Vauxhall View was widely distributed and hugely influential – in particular in encouraging an interest in planning issues.

The owner, editor and main contributor was Steve Morse whose success was due to his tenacity and political independence. He ran the magazine on a shoestring budget from his flat, with the support of a small team of unpaid helpers.

Saturday 9 January will be the tenth anniversary of his tragically early death and Community Support plan to hold a memorial event.

For details please leave a message at 020-7582 8248 or email communitysupport@email.com.