Earlier on this year Brixton Blog met up with urban fitness expert Terroll Lewis. He is the savvy founder of a fast-growing keep fit movement he created in prison way back in 2009. Since Lewis led his very first public training session with six students in Kennington in 2010, his unique take on keeping fit has gone from strength to strength.

Today his energetic Block Workouts, which include sessions hosted at a minimalist street gym in Brixton, pull in more than 100 people every week. A diverse of group of men, women and teenagers of all fitness levels, all adherents of Lewis’s high octane approach to exercise.

This year marks the first anniversary of the Brixton Street Gym established by Lewis on Somerleyton Road. Here he reflects on his time behind bars and the origins of the Block Workout.

“I got into a lot of gangs growing up as a youngster and got involved in a lot of trouble. I was lacking a father or older brother figure. I was a lacking a role model. So I started running into trouble, moving with the wrong crowd and ended up in prison in 2008. When I was inside I started training. It was just me in my cell training everyday surrounded by four walls. I was using my bin and bed to do press-ups, reverse dips and sit-ups.

“That’s where Block Workout started for me. It was about doing something to keep my mind occupied. When I was released from prison after being found not guilty of the crime I’d been accused of, I put my street life behind me and decided to keep my fitness routine going.

“I went to a public playground on the Myatt’s Field Estate not far from Brixton. I started doing press-ups, sit-ups, pull-ups and leg conditioning work on parallel bars.

“I posted videos of my sessions on Youtube and things took off from there. It was a shock to see that people were interested in what I was doing to stay fit. For me this was about doing something to keep busy and stay focused, instead of getting back into trouble.

“With my videos on YouTube I found that more people were getting in touch and asking me to run training sessions. So I ran little classes where people would come and train with me for free. Word of mouth, Twitter and Facebook helped things to take off.

“There are lot of young people out there who are lacking the stability provided by good role models or a strong family. That’s what Block Workout is about. It’s all about a family of people coming together and striving for the same goals through fitness. Social media really helped things to take off. Last year I secured a deal with a TV show (Star Block Workout) and got the chance to travel to Brazil and South Africa training celebrities.

“At the moment I have the perfect balance between commercial and community activities. I run my own charity, the Block Workout Foundation, which works with 13-16-year-olds who are on the fringes of crime or active gang members. My main goal now is to get more funding.” Visit www.facebook.com/BlockWorkOut or follow @TerrollLewis. 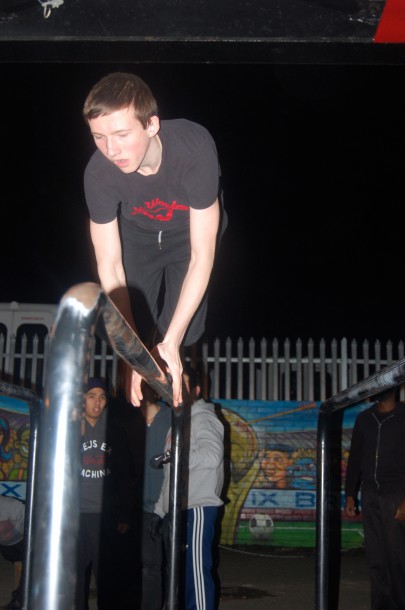