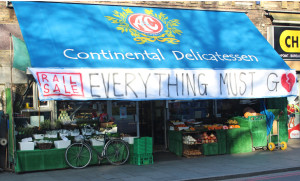 A benefit event is being held for the campaign to stop the evictions of businesses under Brixton’s railway arches.

The event will be held at 8 p.m on Friday April 10 at The Cambria, SE5, and will include an interview with Jose Cardoso from A&C Continental Deli.

The Facebook event says:  “Club Integral Local returns to The Cambria with a benefit event for the Stop The Evictions campaign (retailers on Atlantic Road and Station Road).

Jose Cardoso from the campaign is being interviewed and taking questions from the audience, and entertainment from scowling protest singer Bing Selfish and more soon to be announced. Suggested donation – £5″

The petition calling for Network Rail to stop the evictions has been signed by over 20,000 people, you can add your name here.

SAVE OUR SHOPS: Network Rail plans

SAVE OUR SHOPS: Shutter art!