Global Justice Now is a democratic social justice organisation, challenging the powerful, working as part of a global movement to create a more just and equal world. In solidarity with people fighting injustice, especially in the global south, the group mobilises people in the UK for change.

On Tuesday 17 February, the Brixton group held a relaunch event at the office in Oval, with a short film and discussion of the Transatlantic Trade and Investment Partnership (TTIP) currently under negotiation between the EU and the USA, how TTIP is part of a wider global trade agreement agenda, and whether there can be different ways of doing trade agreements.

Global Justice Now Director Nick Dearden started off with a quick overview of the details of what TTIP consists of, and what we can do about it if we disagree with the prospects. Nick told us that the campaign against TTIP was one of the most exciting he’s been involved in yet. Whether you are mainly interested in agriculture, public health, the environment, or economic inequalities, the anti-TTIP movement brings together activists interested in a great number of social issues under same umbrella. 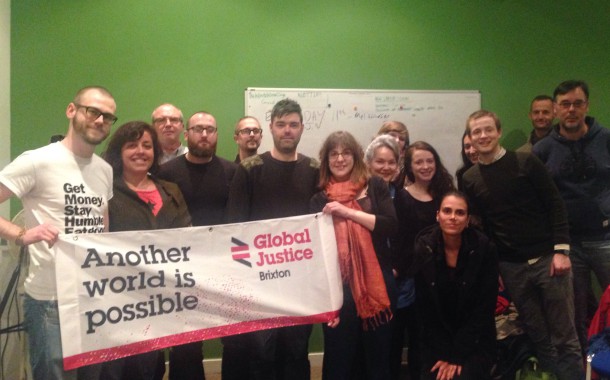 Negotiations began around two years ago for TTIP, the biggest bilateral trade agreement yet, though the secrecy surrounding these negotiations has been criticized. TTIP is promoted as removing barriers to trade and investment. But Nick pointed out that trade obstacles can affect things we care about, and what we have democratically opted for, such as the higher food standards regulations in the EU. Public services and utilities, such as the NHS, may be increasingly contracted to private providers.

Many are most concerned about the investor-state dispute settlement (ISDS) arm of TTIP. ISDS could create a parallel legal arbitration system, where investors could sue foreign governments if countries passed regulation that damaged profits (like in the case of Philip Morris International tobacco company suing Uruguay for passing anti-smoking legislation in 2010). Nick summarized the TTIP issue as a challenge to our democratic ability to hold our governments to account, as it is ‘…rewriting the rules of international capital, I would argue in favour of companies and away from ordinary people’.

We then heard from Luciana Ghiotto, researcher and member of Attac Argentina, part of an international organisation working towards social, environmental, and democratic alternatives to neoliberal globalization. Luciana discussed TTIP in the context of other free trade agreements of the past two decades. In the 1990s, as part of the North American Free Trade Agreement (NAFTA), Mexico was required to change its constitution, and protected land for indigenous communities had to be opened up to competitive ownership.

Luciana pointed out, however, that alternatives from the Americas could inspire other regions of the world. Mass mobilisations and peoples’ summits convinced governments not to sign the Free Trade Agreement of the Americas FTAA in 2005. Ecuador, for example, has made two audits on foreign debt, taking steps to examine the reasons behind its financial situation. Luciana optimistically noted that ‘different attempts to change the story have taken place…small actions with huge political effect that could be replicated around the world’.

If you’d like to learn more and join in, Global Justice Brixton’s next meeting will be on 3rd of March. Join the Facebook group or email sullivlj@tcd.ie to get involved. Global Justice Now is holding their relaunch event, Take back our world!, at RichMix on Saturday 21st February. You can find the European Citizen’s Initiative petition against TTIP here.