Eight political parties are fighting for your vote in this Thursday’s local elections. We gathered the council hopefuls together to face questions from our readers about what they’d do in power. 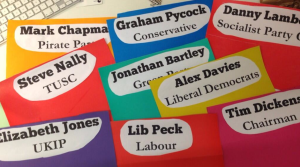 During a noisy debate, candidates were challenged on housing, spending cuts, the proposed free school on the Lambeth College site and a range of other issues.

We’ve summarised their views on the big issues below. You can also read the Twitter highlights from the evening and articles by a wider range of local candidates on why you should vote for them.

Blog verdict: The pantomime villain of the evening was Ukip candidate Elizabeth Jones. To the sound of ‘boo’ and ‘hiss’ she told the audience they “loved being offended” by her views on immigration because it let them believe they were on the “moral high ground”.

Labour’s Lib Peck, leader of Lambeth council, also had a difficult time. She was forced to defend her party’s spending cuts against accusations she had “done the government’s dirty work”.

The audience warmed to the smaller parties, especially the Socialist party, Pirate Party and Trade Unionist and Socialist Coalition, with their snappy sound bites and big visions. But will this be reflected in this week’s vote? 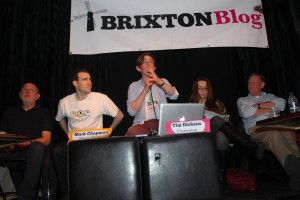 “We have a shambles of a housing policy, based on greed rather than need. There’s a purge of 40-year-old housing co-ops. Barratt Homes have been told they don’t need to provide the social housing they agreed to. The council wants to raze Cressingham Gardens – it’s extraordinary.

“This council consistently genuflects to developers to do deals which are good for them but not good for the people of Lambeth.

“We’re pledging to scrap Lambeth Living. Any councillor with an inbox can tell you it’s failing. It fails tenants with an appalling record on repairs, and it’s ripping off leaseholders. You end up with people paying huge amounts for capital works, which they shouldn’t have to pay.

“On the sale of shortlife housing, we should try to get people around the table, and come to a solution in which people are paying rent and the council isn’t turfing them out.”

“We are very committed to housing. We plan to build 1,000 new council homes in the next term. We’ve put in £450m into social housing.

On the sale of shortlife housing: “We have 24,000 people on the waiting list and there’s a need for more investment in social housing. Some shortlife property is very expensive and we could do up five properties when we sell one.

“That for me is a difficult choice but one I have to make because the responsibility is to the wider number of Lambeth residents.”

On the plans for a free school on the Lambeth College site, and the planned lecturers’ strike

“I’m clear about the free school that has landed in Brixton Hill. I think free schools have been nonsense from Gove.

“We can’t use our planning powers to stop the free school but we can look how much they’re trying to pack onto the site, because there could be over-densification.

“The Catholic church thinks [the school] is so extreme that they’re not sanctioning it, which for me is a big problem.

“I support the right to strike but I don’t know enough about it to say whether I support the strike in this case.”

“As things stand we’ll lose two thirds of Lambeth College’s classroom space and it’s being replaced by a free school that’s not based on local need.

“As a former NUT member I’ve never supported a strike. I understand the lecturers’ objections and have some sympathy, but under no circumstances would I ever go on strike at the expense of my students.”

“The concept of faith schools, free schools and academies needs to be overhauled. We support the return of grammar schools, which would give poor but very academic children a chance in life.”

“I’m a Liberal Democrat but I’m not a government minister, and I’m not a fan of free schools. My instinct is that local authorities should have more, not less, control.”

“Yeah, I support the strike. We support all workers’ efforts to gain the best they can but we should also attack the cause of the problem. We want the abolition of the wages system itself.”

On democracy and openness

“Why does the informal cabinet of 10 people make all the key decisions behind closed doors? We will abolish the cabinet. All our decisions will be accountable to the people.”

“We stand for whistleblowers standing up for citizens. We campaign vigorously against mass surveillance, against GCHQ being able to monitor your Skype conversations.

“I want to end the distance residents feel between selves and politicians. I will rank your opinions above petty party politics. I’ll be your independent voice speaking up for you.”

“This Labour council is very expensive to run. But hey, you always vote Labour. As Einstein says, the definition of madness is doing the same thing over and over again and expecting different results.” 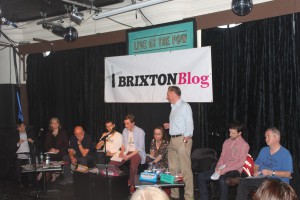 On roads and pavements

“The streets have become markedly dirtier in last few years. There’s more and more fly tipping because people have to pay for a collection.”

“Lambeth has one of the worst records in London for filling in potholes. It’s daft to build speed bumps and not fill in potholes.”

“Pavements are being needlessly relaid. I completely fail to understand it. This council’s priorities are completely wrong.”

“130 miles of roads and pavements are to be resurfaced in the next administration.”

“We don’t accept the agenda of non-stop cuts and austerity.

“We need a fightback to protect jobs and services. We see a “co-operative council” that’s doing the dirty work of he government and passing on cuts to jobs and services year in year out. In the past Labour had a vision for working people, of housing and education – not any more.”

“Elderly care, the health service, libraries and education are all paid for out of profit. At the moment we’re in a financial crisis, so the services get cut – that’s capitalism.”

“I love all this simplistic socialism about fighting cuts. The assumption is that money is given to you by fairies in garden. It’s about time people blamed the people who got us in this position in the first place.”

“There would’ve been huge cuts under a Labour government too. We can’t have the deceit that local authority budgets would be hunky dory if Labour was in government.”

“We’re passionate about libraries and housing. We’d save money by sharing services with other councils and scrapping press officers and climate change officers.”

“Rather than talking about 40% cuts, we have to work out how we can spend the remaining 60% to the advantage of everyone in borough, and that’s what the cooperative council is trying to do.

“We don’t want to go back to what Lambeth was like in the eighties [when the council refused to set a legal budget]. We’re still repaying debt from that period.”

“Liberal Democrats are unashamedly pro-immigration. The Ukip flavour in Lambeth has been distasteful.”

“I love Lambeth because of its diversity”

“As for immigration, as far as I’m concerned planet earth is the home of humans”

“We’re a party of freedom and are pro-immigration because it’s the freedom to move.”

“We live on an island, our resources are shrinking, and we simply cannot have open door immigration. There has to be number control. Ask yourself, what would you do if the entire world’s population decided it wanted to come and live in London?”

“I resent people who use others as a scapegoat. There’s a more rational conversation to be had.”

“Immigration has made an important contribution to culture in this area, and makes a huge contribution to economic growth. The thing we ought to be cracking down on is the abuse of immigrant labour.”

“Ukip is a party of multi millionaires who want to divide the working class.”