By Katie Lathan in Westminster

Chuka Umunna, Labour MP for Streatham, today called upon the Lord Chancellor and government ministers to reverse the decision of the Legal Aid Agency not to grant Cherry Groce’s family legal aid for representation at an inquest into her death.

Cherry Groce was shot by police in a bungled police raid on her family home in Brixton in September 1985, which left her paralysed from the waist down. The incident sparked the Brixton riots.

Ms Groce died in 2011 and the pathologist’s report showed a direct causal link between her shooting and her death.

The Metropolitan Police did not issue a private apology to the family until last year. A public apology was issued last week.

Mr Umunna said: “It’s extraordinary that the police took 28 years to issue anything resembling an apology for what happened.

“If we continue to see situations like this where families are denied support, I don’t see how we can even begin to rebuild trust, which is needed for the Met to do its job properly, and for the justice system to command the trust of the community.”

“We haven’t had the opportunity to grieve our mother’s death, because we have this inquest and no representation, and it’s intimidating when you’re sitting around a table with professional barristers.”

Mr Lawrence thanked all those who have signed the petition to reverse the decision of the Legal Aid Agency, which has been signed by 116,000 people over the last seven days.

The inquest, which will be held in front of a coroner and a jury, is due to take place in June this year, regardless of whether the family have legal representation.

The Legal Aid Agency made their decision on the grounds that a criminal trial has already taken place, that an investigation was conducted and that the inquest is not in the wider public interest.

An investigation was made by the West Yorkshire Police into Ms Groce’s shooting, however her family were only given access to a revised document of their findings in November 2013, following two hearings and the family’s initial request in April 2013. 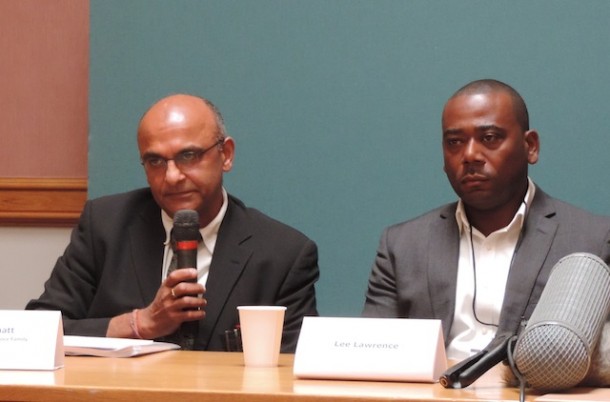 The Rt Hon Lord Boateng said of the way the case has been handled by the authorities: “It demonstrated that in some way the life of a black woman, and the suffering of a black family, just counts for less because the woman and the family are black.

Deborah Coles, co-director of the charity INQUEST, described the decision not to grant representation to the family was “completely unacceptable”, and meant that there was an increased danger of being unable to hold the state to account for their actions.

Charlene Laville, Ms Groce’s granddaughter, said: “It’s been 30 years since this happened, but for us it’s been three generations of injustice.

“Cherry had daily suffering and daily pain, and now we have to stand in front of people and ask if her pain can finally be heard, and I don’t think that’s fair.

“It’s only right that we have a fair hearing – that’s all we ask.”

‘He was a champion of social justice’ Chuka Umunna pays tribute...