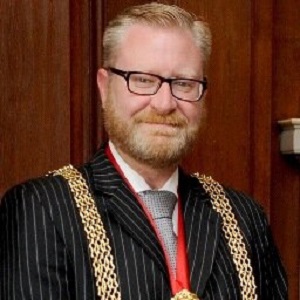 The Mayor of Lambeth, Cllr Mark Bennett, has died of a suspected heart attack, aged 43.

Lambeth council confirmed the news of his death, saying he passed away in hospital this morning (Tuesday).

His unexpected passing has left his town hall colleagues stunned and devastated.

Cllr Lib Peck, Leader of Lambeth Council, said: “I am devastated to have lost someone who was not only a fantastic representative for the borough, but also a much loved and close personal friend.

“Mark was a very talented individual who went above and beyond for the people of his ward, and for the whole community.

“He loved being mayor, welcoming people to the borough and supporting great causes, such as his support for The Trussell Trust, which runs food banks across Lambeth. He was well known for his passion for history often peppering his speeches with stories from the past.

“We will all miss him deeply.”

Cllr Bennett was a former Cabinet Office civil servant who served as an assistant to the Chief Press Secretary Alastair Campbell at Downing Street from 1997 to 2001 under Tony Blair.

He was a Labour councillor and Lambeth council cabinet member for more than six years before becoming mayor in March 2013. The openly gay councillor was a campaigner against hate crime, and took part in the 2013 London Gay pride Parade wearing his mayoral chains.

Details of Cllr Bennett’s funeral and memorial service will follow. A book of condolence for Cllr Bennett will be opened at Lambeth Town Hall.

Leave your memories of Cllr Mark Bennett in the comments box below, or email us at newsdesk@brixtonblog.com