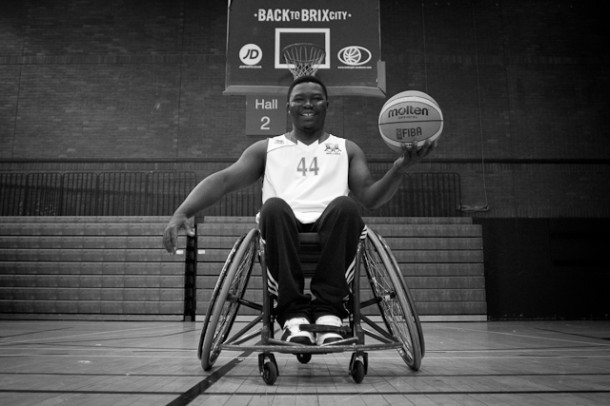 Brixton Ballers was set up 18 months ago by Austin Kabebe, or ‘Coach K’ as he’s known to the team. With support from Percy Hutchful, a fellow professional coach, the club now regularly attracts 10 to 15 players for its weekly Saturday training sessions at the Brixton Recreation Centre.

Coach K and Percy also coach the running game – basketball for able-bodied players – a game popular among the black community. But when Coach K began to coach wheelchair basketball, he found it to be a very white sport: “I must have seen one or two black players. What’s that about? It makes no sense.”

It’s not always easy to attract players to the sport. “The attitude in some cultures to disability is to hide you away, you won’t do anything,” explains Coach K. “With this club, we have people of colour come. It’s changing how people look at disability.”

Brixton Ballers attracts players from all over south London. Roger Zoppola, who is 58 and originally from Colombia, travels from Peckham to play in Brixton every week.

Roger moved to the UK in 1983 and was a competitive marathon runner. In 1991 he was back in Colombia for competition when he was shot in the arm. The bullet went through his chest and severed his spinal cord. Roger became paraplegic and his dream of competing in the Barcelona ‘92 Olympics were dashed.

Roger didn’t play sport for nearly 20 years after the shooting, but last year’s Paralympics changed his mind. “I went to watch Italy and Colombia play in the wheelchair basketball. I thought: Oh boy, I can play better than them!”

Roger’s one of the most committed members of the team, but it wasn’t easy to get used to playing wheelchair basketball; it’s a technical and fast-paced sport. He prefers to be a runner moving up and down the court, rather than a shooter or in defence where there is a risk that he could tip backwards. He’s careful not to damage his back.

Attending the training session, it’s clear that the players look out for each other, pushing each other to play harder and faster. I was invited to play too and was egged on by Roger, who shouted encouragement as I pushed my chair up and down the court, exhausted.

Wheelchair basketball is more of a team sport than the running game, claims Coach K. It’s impossible to progress down the court without the help of your team and in his eyes, it’s the ultimate team sport.

That team spirit helps the players outside the club too, believes Coach K. “When you’re new to disability, it can be particularly difficult to ask for help. In this sport you have to have help, so when you’re back outside, you’re more likely to ask for help from others.”

Paul, who is 32 and originally from Ghana, joined the club when it first started. He’s made a good group of friends and says that the players regularly see each other socially.

He admits he was nervous when he first began playing and that it took him nearly a year to feel confident on court: “I was worried that I wouldn’t be able to manipulate the chair and I didn’t really know the rules.”

“The coaches would shout and would say I’m too slow, but now I’m very good. I’m the best you know,” he grins.

The team does worry about the Rec’s future. The sports hall floor is showing wear and tear and clearly needs re-doing, but plans to re-surface the floor last November were dropped, which worried Coach K: “I thought we were going to lose this place.”

“We’re a Brixton team and there are no other courts for us to use in Brixton,” he continues. “If this place goes we’re stuffed.”

In just 18 months, the Brixton Ballers have managed to build a committed team and are looking forward to playing in a league for the first time. They take their training seriously and Coach K and Percy are keen to build the strongest team. The team welcomes new players, but it’s not for the faint-hearted. They mean business.