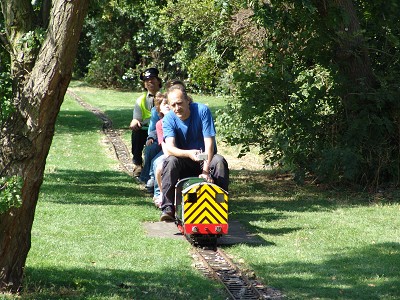 Brockwell Park’s very own railway line is looking for drivers and “station staff” as they start their summer season.

The 220m-long, 7 1/4″-wide track, which runs for 220m from the Herne Hill gate to near Brockwell Lido, opened to the public earlier this month, but is suffering from a lack of volunteers.

They team will run their steam locomotive “Oscar” on Sunday 29 April. The railway is also enjoying a new “Intercity” locomotive HMS Pembroke, delivered earlier this year.

Trains will now run every Sunday from 11am until 4pm, and rides cost just £1.

A spokesman for Brockwell Park Miniature Railway said: “The long term success of the railway looks promising as passenger numbers remain steady, we continue to have the backing from Lambeth Council, Friends Of Brockwell Park and the Brockwell Lido and without their support the railway would not have lasted as long as it has.”