A man who terrorised diners in a Brixton McDonalds during last summer’s riots has been jailed for more than five years.

People fled from the restaurant, in Brixton Road, after Karl Smith, 26, of no fixed address, began swinging the axe three times before using it to smash the window on 7 August. He had earlier thrown a brick at the window of William Hill bookmakers, Coldharbour Lane, and was seen on CCTV walking out of the Footlocker store, Brixton Road, holding aloft bags of loot.

Smith was sentenced to five years and three months in prison by a judge at Inner London Crown Court on Tuesday.

Acting det insp Dale Luke from Lambeth police said the criminal was brought to justice by local officers as part of Operation Withern. 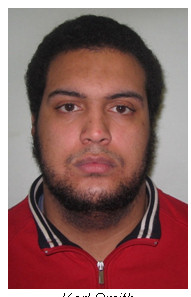 “The sentence passed today is the result of a dedicated and professional investigation and reflects the on going effort to identify those persons involved in committing serious criminal offences.

“My officers continue to work very hard in pursuing individuals who decided to participate in the disorder within the Borough of Lambeth last August.”