Brixton BMXClub celebrated its 40th anniversary today (16 October) with a party at the Station Hall community venue in Herne Hill.

The birthday comes as the club is in the middle of a crowdfunding campaign to raise funds to upgrade its track in Brockwell Park.

A stunning video by Jakub Arendarik outlines the club’s history, its plans for the future and how it operates.

You can contribute to the crowdfunder online.

The BMX track is already very well used, not only by the club riders. Improvements to the facility would be a major benefit to the wider community, the club says.

It is raising funds for its track refurbishment programme with a sponsored ride.

Every club member is riding 40 sponsored laps. If they can reach 3,000 laps as a club, it will be equivalent to the distance from Lands’ End to John o’Groats.

Phase 1 of the upgrade, a complete resurfacing job, is already paid for and work on it will start in early November courtesy of track building specialists Clark & Kent.

More funding is needed for the additional works the club has planned, including a new lock-up alongside the start hill with power and water; an asphalt surface from the finish line to the start hill; and fencing all the way round the facility.

As well as the central club crowdfunding campaign, some of members have set up their own personal fundraising links. 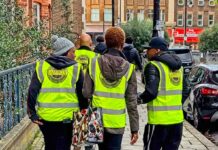 Make a difference – be a mentor