Supported by the Portal Trust, the progarmme – Talent Led: Next Generation – will help 18-25-year-old film, TV and immersive media creatives seeking a professional career in the UK screen sector.

The young writers, directors and producers will learn about film development and pitching as well as the skills and knowledge needed for all elements of film production.

Funding from the Portal Trust, which is dedicated to supporting young people in London to have life-enhancing, educational experiences, enables the programme to to offer masterclasses and one-to-one mentoring.

It culminates with the young creatives pitching their projects to industry executives and agents.

The programme was created in response to the British production boom and the industry’s need for qualified production talent.

It is designed to give young people from inner-city neighbourhoods in Lambeth, Southwark, Lewisham and Wandsworth a taste of the professional world of film and TV.

It will also boost their job prospects and help them to make their way in the UK screen sector.

The programme will particularly welcome young people who identify as under-represented in the UK film and TV industry.

The application process is open now and closes at the end ov May 2022. The programme starts in early June. 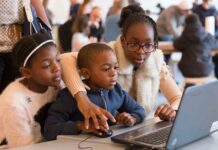