A local campaign to expose shocking restrictions on access to health care will launch in Brixton on Friday (28 January).

More and more people are facing charges when accessing health care. To raise awareness of this, Patients not Passports is organising a free film screening.

Regulations, brought in from 2015 onwards, have introduced charges for people who need healthcare, including migrants.

The charges discourage many people from accessing health care, even A&E treatment, which is free.

The Patients Not Passports campaign’s inaugural event will screen a new film, NHS Borderlands, which includes interviews with people facing charges, health care workers and policy professionals, and will be followed by a panel discussion.

The panelists are Angela, who was featured in the film after being charged £8,000 for a hysterectomy, filmmaker May Robson and Jan O’Malley from Patients Not Passports.

“When I learned about migrant charges, I felt so angry that I was energised to set up a local campaign against them to fight for the NHS to be a truly universal service as envisioned by Aneurin Bevan in 1948,” says Jan O’Malley, a member of Lambeth and Southwark Patients Not Passports.

“So few people seemed to know of these charges and I wanted to raise awareness of this barbaric element of the hostile environment which brings racism and immigration controls into the very heart of the NHS.

“The Covid pandemic has shown us so clearly that the virus does not recognise borders and that our health depends on the health of our neighbours here and throughout the world.”

The film screening is free and is at 7pm on Friday 28 January at Effra Space, 21 Effra Parade, SW2 1PX.

Attendees are asked to register in advance, wear a mask and take a lateral flow test beforehand. Register on Eventbrite. 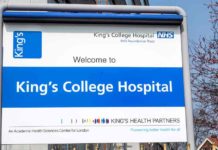 Closures of low-cost nurseries ‘will drive staff from NHS’