She said her challenge follows the “appalling murder” of-18-year old Donnell Rhule on the Kingswood Estate in the south of her Dulwich and West Norwood constituency last week.

Hayes called on the prime minister to commit to implement the recommendations of the Youth Violence Commission’s final report, due to be released tomorrow.

The commission published an interim report two years ago.

The Youth Violence Commission calls for the introduction of a cross-government public health approach to tackling serious violence, investment in youth, mental health and early years services and community policing, and reform of the criminal justice system. 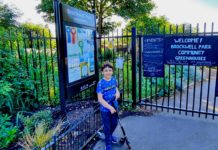 Contributor - 31 July, 2020 3
Police have today (31 July) imposed conditions on tomorrow’s planned “lockdown” of Brixton as part of the...

6 August, 2018
We use cookies to ensure that we give you the best experience on our website. If you continue to use this site we will assume that you are happy with it.OKPrivacy policy