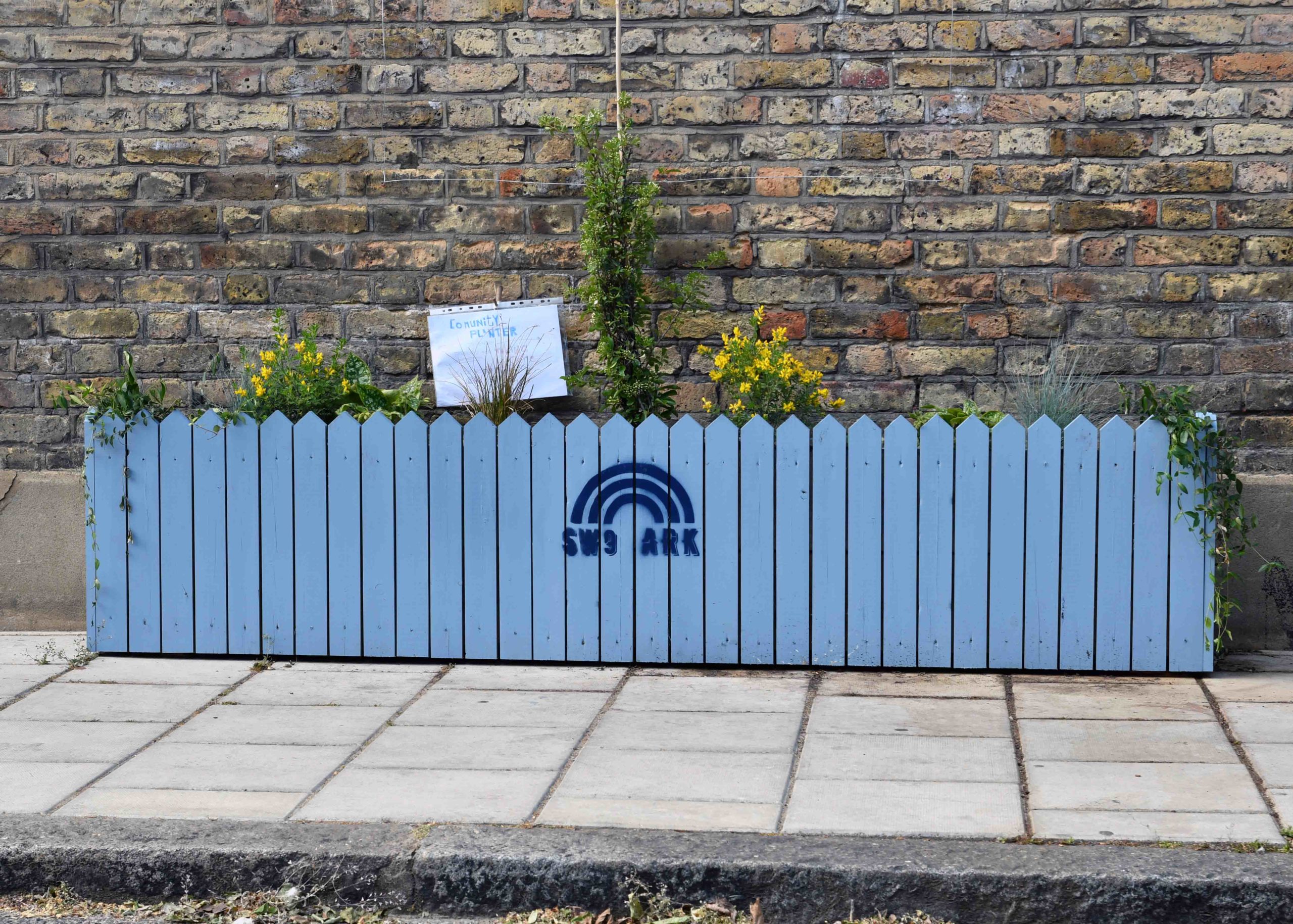 We have all been added to street WhatsApp groups, meeting neighbours for potentially the first time. One such group in Brixton, initially set up to help and support residents who were unable to go to the shops due to the pandemic, has decided to use the lockdown to take action on fly tipping in their neighbourhood.

Pulross Road, Hargwyne Street and Nealden Street all have key places where fly tipping regularly takes place. When it happened during lockdown the community started to discuss it on their group and problem solve together. Resident Juliette suggested planters that would brighten the neighbourhood at the same time as restricting the space to dump rubbish. A group of residents took the lead and the planters became a reality.

“We started the SW9 Street Champions WhatsApp group and we turned Juliette’s idea into these planters.” explains Alex, from Pulross Road.

We meet in front of one set of planters. “We used to get a lot of fly tipping on the other corner too” explains Juliette, “Sometimes it is people just dumping things from their house but a lot of the time its people with white vans at 2am in the morning dumping stuff, if you make it awkward they won’t do it. We’ve had lots of nasty solvents and paint and the toilet!” As a local resident I remember the toilet too!

“There are a lot of kids around here, I have two, and they ask, ‘Dad why are people dumping stuff on the street?’ They just don’t get it. Now, them being able to walk past the planters on their way to Stockwell Primary is really nice and they can say we did that, we painted that” explains Alex.

Hannah continues, “Equally, people who aren’t local realising that you can’t fly tip, because it happens so often people think they can leave things there and the local authority will come and pick it up.”

The project has sparked lots of new conversations between neighbours, Alex says “I meet a guy on Nealden, and he said, ‘I’ve lived here 35 years and people have been dumping stuff here for 35 years!’” 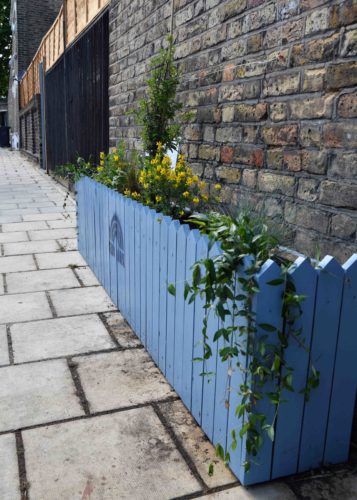 Jude and his son a carpenter, who have lived in their house for 37 years, fabricated the planters. “Once I heard planters, I was in. My son and my grandson all used to live here on Pulross, and my son is a carpenter so I said to him, ‘How would you like to work in the community that brought you up?’ And he said, ‘That’s a good idea Dad, I can make the planter’. We got hold of some scaffolding friends to get the boards. Then we all built the planters for the community.”

The project had a stilted start when the first planters were stolen overnight, less than 12 hours after being made. “I was on my way up with a wheelbarrow of soil to fill them, when Alex rang to tell me they had been stolen, I thought it was a joke!” explains Dyfed from Hargwyne Street.

“We were pretty devastated and tried to track them down. Hopefully they get used!” continues Alex.

The SW9 Street Champions were not deterred and set to work on five new planters. Hannah, a new resident took charge of planting and queued at the garden centre as soon as they reopened to buy compost and plants that were hardy enough to survive. “There are a few bits from people’s gardens, some evergreens and some bright flowers for the summer. We had some people while we were planting who were either donating money or saying thank you so much.” 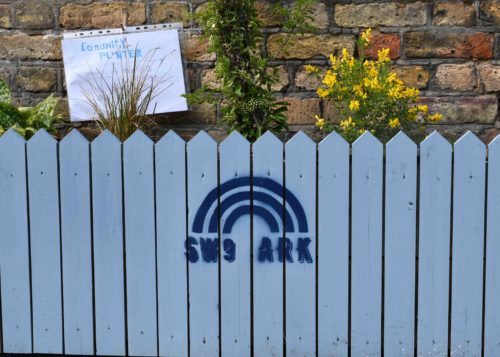 “We’ve had a lot of people saying their parents, who are housebound, were really excited about the planting so they could come out and see them. We’ve had really positive messages around it, and everyone is offering to water. It is bringing everyone together”, adds Alex.

“We are all now Lambeth Street Champions. The organiser said he would be in touch to see how they could help, but we have done it already! It’s all self-funded by locals. We’d like some bike lockers now!” adds Hannah. 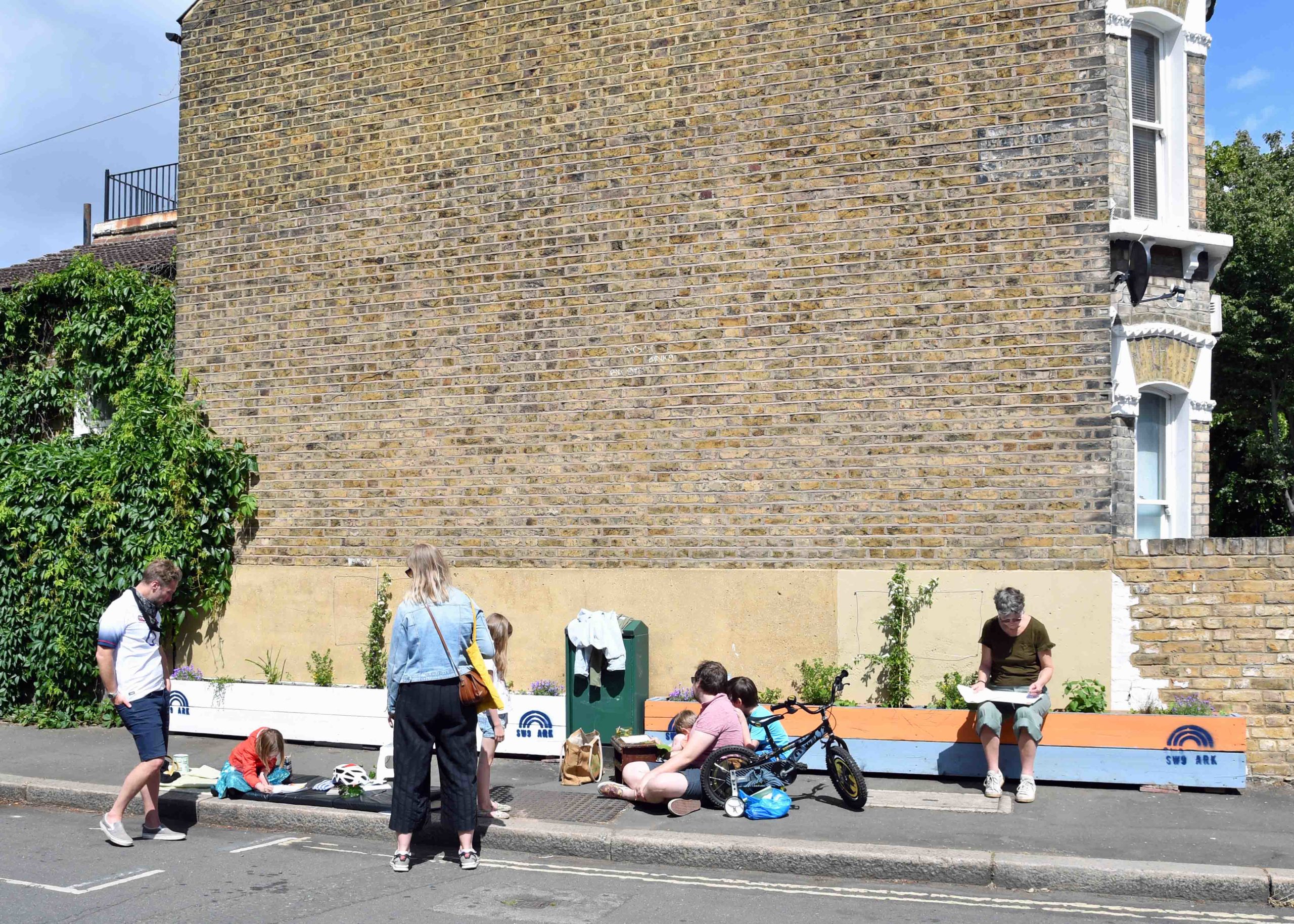 Most of the planters were painted white so local resident, illustrator and Bugle contributor Eric the Fish offered to run a socially distant workshop with local children. Inspired by flora and fauna the children have designed motifs to be painted onto the planters.

The group have even designed their own logo, stencilled onto all of the planters, which can be rolled out across SW9 to celebrate projects by the community for the community. “SW9 ARK stands for Act of Random Kindness, and the rainbow is to celebrate all of the key workers” explains Jude. 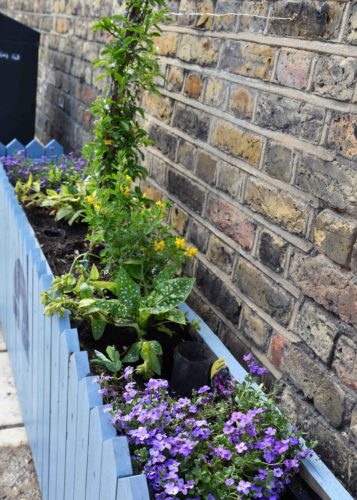 So far, no fly tipping. The planters are brightening the streets and giving the community ownership over corners otherwise filled with unwanted rubbish. Jude adds, “It’s been a good community effort. And what we would like, after the lockdown, is that we all continue and do other projects together.”

Dyfed continues, “That’s the nice thing about the name, it doesn’t confine you to these three streets, it could roll out throughout the SW9 area.”

Hopefully many more positive community projects come out of lockdown, while residents are stuck at home, in their local neighbourhood with time, resources and energy to change things.