There are some advantages to conducting interviews remotely in the age of isolation. Yes – the occasional freezes and lost words are a frustration, but you do at least meet the artist on their home turf – in this case blues singer and harmonica player Errol Linton at his home in Brixton Hill.

He has a gentle, calm and slightly world-weary demeanour as he leans into the camera and draws upon a cigarette. On the wall behind him are some of his own artworks and he begins by telling me that painting commissions have provided a bit of a financial lifeline in the absence of gigs during lockdown.

Linton clearly has a passion for painting and proudly shows me a portrait he’s been perfecting of Toni Morrison. He’s also rightly proud of his sixth studio album album No Entry which came out on Brassdog Records last week.

“This is different to my last album and a lot better than all my other albums, production-wise. It’s produced by Liam Watson, who’s won a Grammy for his work with The White Stripes, and Tim Bulleyment.

The album features Kenrick Rowe on drums, Petar Zivkovic on piano, Adam Blake on guitar and Lance Rose on bass, with a guest appearance by Tony Uter on percussion. 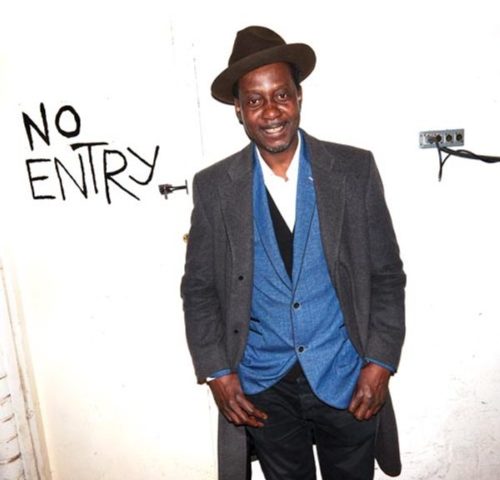 It certainly has the classic sound of great musicians captured on tape in a vintage analogue studio.

Linton mentions Mississippi-born harmonica player Snooky Pryor as a key influence and there are echoes of other Chicago blues legends – until the track Speak Easy, when Linton’s other great musical love comes to the fore.

Born to Jamaican parents and raised in Brixton, Linton has been immersed in reggae for as long as he can remember.

“The reggae thing was always there…” he says before leaning past the camera to grab a harmonica so he can demonstrate the reggae skank that has always been a part of his playing.

“The first time I got some courage to go into one of the record shops in Brixton was in Granville Arcade – big man smoking his weed… That’s how they used to run it in them days!

“I bought Scientist Rids the World of the Evil Curse of the Vampires, and then Lone Ranger M16, Ranking Toyan – they were the big DJs at the time….

“Reggae was all around us in Brixton – at school, at parties… It’s always been natural to combine the blues and the reggae.”.

A friend gave Linton a harmonica when he was in his late teens and he started to visit records shops a little further afield, including Dobell’s in Charring Cross Road, where he discovered a tape of American blues harmonica players from the 1920s and 30s.

His love for the blues soon took hold, and his mastery of the genre has recently been recognised by BBC 6 Music and Radio 2’s Cerys Matthews, who debuted Speak Easy on her show, and by US blues guitar legend Joe Bonamassa, who invited Linton to guest on his new album recorded at Abbey Road Studios.

Linton remains modest about the accolades, commenting about Bonamassa: “He was pretty cool … It was good – I’d never been to Abbey Road before. He’s a good player.”

I ask Linton what’s next, “I just wanna put out a good positive vibe with my music, that’s all. Know what I mean?”

Indeed we do. No Entry is out now.

Temporary housing through the eyes of a child