Lambeth council has approved a series of safety measures to address the high numbers of collisions on Acre Lane.

The council proposed altering the entry points on the road, after a report revealed that the risk of injury at the junction of Acre Lane and Bedford Road is over twice the Lambeth average. The report also showed that the risk between the junctions of Corrance Road and Brixton Hill is 29 per cent higher than average.

The measures, approved on 6 February, will involve a series of “side-road entry treatments”, which include building raised entry points on Acre Lane between Bedford Road and Baytree Road and raising the carriageway level at the junction with Baytree Road.

According to council documents, this will be of particular benefit to cyclists, but also to pedestrians, as the side-entry treatments will force drivers to slow down at particular collision hotspots.

The changes form part of the council’s commitment to reduce the number of people who are killed or seriously injured in personal collisions in the borough to 146 per year by 2022, and to reduce these incidents to zero by 2041.

The council’s report showed that in 2018 there were 27 collisions on Acre Lane between Bedford Road and Brixton Hill, three of which were deemed “serious”. In 2016, there were 23 collisions on this stretch, including two serious incidents.

According to the report, 42 per cent of the collisions were attributed to drivers acting “careless/reckless/in a hurry”.

The report showed that the entry points from side roads onto Acre Lane were the main sites of collision. Therefore the level of the carriageway will be raised at the entrances of Hetherington Road; Strathleven Road, Plato Road, Solon Road; Branksome Road, Corrance Road, Ballater Road, Concannon Road and Baytree Road, where there will also be a “bus friendly” raised table on the section of Acre Lane in front of it.

The proposals also include a bus friendly table at the junction between Acre Lane, Bedford Road and King’s Avenue and resurfacing of all the approaches to the junction to address the number of loss of control collisions.

The council estimates the cost for the changes will be £256,000, which will come from Lambeth’s 2019/20 Local Improvement Plan grant settlement from Transport for London.

The work is scheduled to start in March 2020 and finish in May. 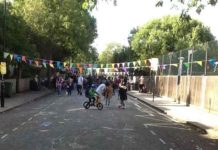 Contributor - 14 July, 2020 0
Hootananny in and Market House in Brixton are among the beneficiaries of Lambeth council’s fund to support...

Contributor - 14 July, 2020 0
Hootananny in and Market House in Brixton are among the beneficiaries of Lambeth council’s fund to support...

Take Two: Cheap Mondays @ The Ritzy and learn to swing...

14 June, 2019
We use cookies to ensure that we give you the best experience on our website. If you continue to use this site we will assume that you are happy with it.OKPrivacy policy