This year’s shortlist included clubs who involve supporters and local partners in making a positive impact in their local communities.The other clubs shortlisted were Bath FC, Boston United, Dagenham and Redbridge, Stockport County and Whitehawk FC in Brighton.

More than 340,000 votes were cast in the award’s 11 categories which are decided by popular vote.

As well as working with the Premier League and other major football organisations, it also cooperates closely with organisations like Kick It Out and Level Playing Field and has supported the establishment of scores of BAME and LGBT fans’ groups in recent seasons.

The FSA was formed when the Football Supporters Federation (FSF) merged with Supporters Direct in November this year. 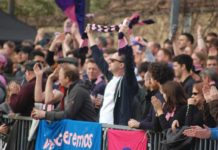 Local club with a long tradition

Local club with a long tradition