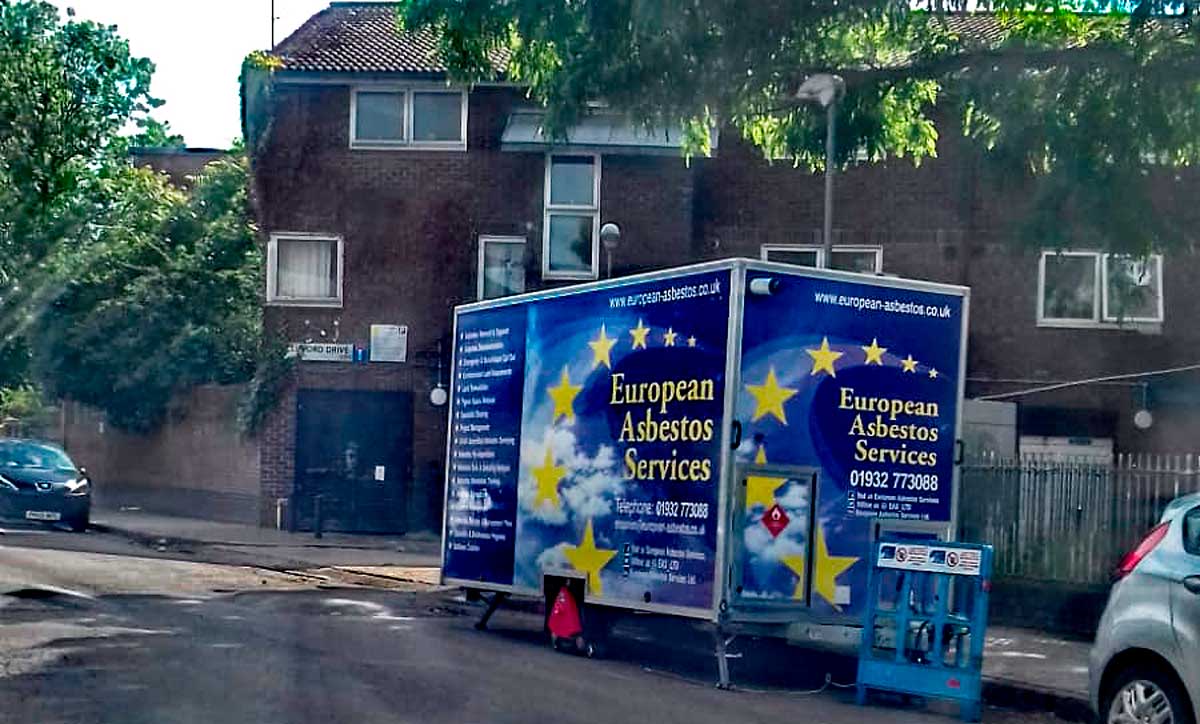 Residents of the Moorlands estate along Somerleyton Road behind the Barrier Block are concerned about possible asbestos in their homes following the appearance of an asbestos removal container (above) as refurbishment work took place.

The post-war estate was transferred from Lambeth council to the Metropolitan Housing Trust in 1998.

One resident who contacted the Brixton Blog and Bugle, and who wishes to remain anonymous, said they had been told that their kitchen ceiling needed to be removed and replaced as it contained asbestos that could be affected by work to install new equipment.

The tenant said that Metropolitan had told them that they must stay in their small one-bedroom flat with kitchen equipment stored in the living room while three weeks of work, including asbestos removal, was carried out.

Metropolitan, which merged with Thames Valley Housing in 2018, told the Blog: “The use of asbestos in construction in the UK was fully banned in November 1999 – so any building constructed or refurbished before that time may contain it. The material does not pose a risk unless it is disturbed.

“The safety of our residents is our top priority and we strictly follow all guidelines and regulations on asbestos management set out by the Health and Safety Executive.

“We are currently undertaking a programme of bathroom and kitchen replacement work on the Moorlands estate.

“At some of the homes in which we are working, it has first been necessary for a specialist contractor to remove small amounts of asbestos – in line with regulations.

“This work was required because there was a risk that the material would have been disturbed by necessary electrical work related to the refurbishment.

“Our on-site resident liaison officers have spoken directly with affected residents to explain the work being carried out in their homes, and are available to provide any further information or support required.”

Lambeth council recently advertised for a £300-a-day asbestos consultant to work for between three and six months acting as lead officer on all matters relating to the finding, recording and handling of asbestos.

A council spokesperson told the Bugle that the adviser would act as part of its normal compliance team and that the post would cover the whole of Lambeth, rather than any specific project.

“The whole of our technical services team is being reviewed, so we are filling urgent posts with agency staff to fulfil our requirements until we have agreed our ongoing resources,” the spokesperson said.