Local Brixton institution the School of Communication Arts 2.0 (SCA) has recently launched its scholarship competition for this year. 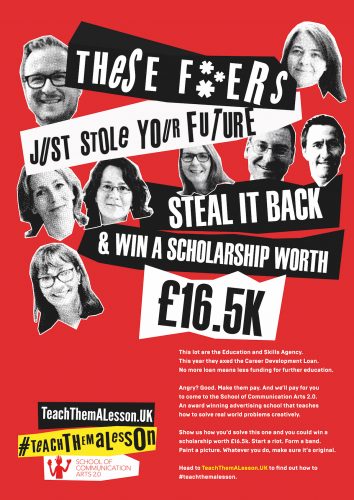 Applicants have to produce a 2-minute video and means that the lucky winner will have their entire £16.5k fees paid for. The competition this year, called Teach them a Lesson, is to make a campaign that revolves around the anger that the Government has axed the Career Development Loan.  “Start a riot. Form a band. Paint a picture.” Are a few of the interesting suggestions on the website. Importantly they’re looking for something creative and original, an example from a previous year was one applicant who climbed Ben Nevis in high heels.

This is a fantastic opportunity for any looking to break into the world of advertising. The SCA is world renowned for the course it offers and boasts over 100 industry connections who are involved in everything from sponsoring scholarships and mentoring students. Their network of over 1,000 mentors include Sir John Hegarty, Rory Sutherland, Laura Jordan Bambach, Peter Souter and Alexandra Taylor.

Students will leave with, instead of the traditional dissertation, a professional portfolio of work. This will be showcased at the school’s end of year ‘Portfolio Day’ at which their affiliated agencies are invited down to view the student’s work. They boast impressive results using this model, with almost all students receiving placements soon after finishing the course and 80% getting employment in one of the Top 100 agencies within 6 months of leaving.

I spoke to Charles Olafare and Josie Finlay, both students at the SCA and the team running the scholarship competition this year. Every year the current students set up and run the programme which has been running for the past decade alongside the course. I asked them about the sponsorship, the government cuts and their time at the school.

Both of them started working before they came to the SCA, Charles in media and marketing, and Josie in publishing. They said that it was creativity that they struggled to find as part of the workforce with high praise for time they’ve already spent on the course. “I can’t imagine what I would have done otherwise.” Josie said.

Charles added that the course is very “hands on” and that “every week we learn something different”. He talked about his experience accessing higher education resources, describing the whole system as “…quite unfair, that not only was funding hard to get, but the government has taken more away.”

Diversity was something that the two highlighted that was quite a large problem in the industry, Joise added that the cuts “make diversity even worse in the advertising industry.” Both praised the SCA “[it’s a] place for diverse backgrounds, [they are] needed in the advertising world.” Said Charles

I asked what advice would they give to anyone looking to apply? “Do things that people want to get involved in.” Josie said, “Something personal. Something original.”

Most importantly they called on creatives of all levels of talent to get involved, “Ever watch an ad and think ‘I could do that.’? Then this is the course for you.” Charles said, Jodie adding that anyone who is interested, would like advice or needs help shouldn’t hesitate to get in touch.

The deadline for applications is 1 July 2019,

To find our more you can visit their website,

Or check out the SCA website to learn about the school.