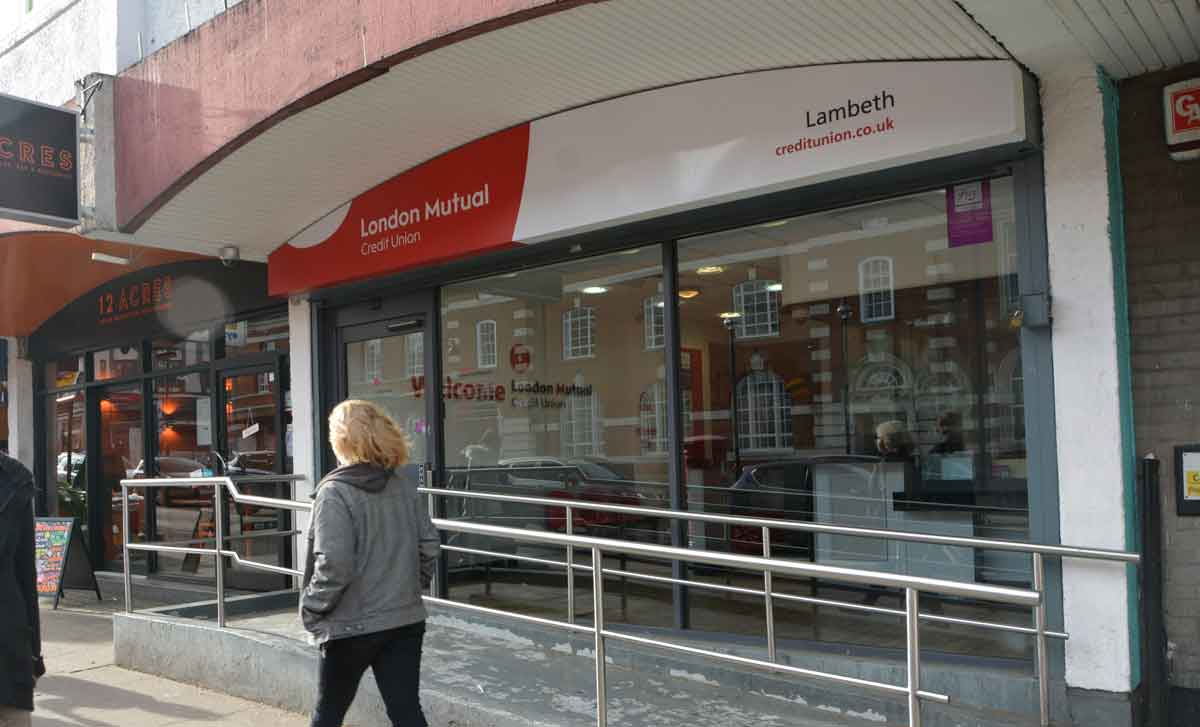 Years ago, if someone mentioned “credit unions”, you might be forgiven for envisioning a man with a ledger, offering loans in a church hall.

The goal of all credit unions is still to create a financial community whose members can pool savings and access affordable loans from the “kitty”. But the London Mutual Credit Union (LMCU) and its branch at 10 Acre Lane show how this self-help movement has become a lot slicker in recent times and offers practical solutions to money needs in Brixton and beyond.

Today, 2 million people in the UK are members of a credit union – an increase of around 250% in the last decade, according to the BBC. And it’s not hard to see why.

Unlike a high-street bank, third party share holders and owners will not have a say in how your hard-earned cash is used. The savings of members of a credit union are invested directly into the local community, through ethical and responsible loans to other members of the union.

Members’ savings are covered by the official Financial Services Compensation Scheme, with investments of up to £85,000 protected.

The LMCU also offers current accounts that can be accessed via Link ATMs and that allow pay, pensions or benefits to be paid directly into accounts that offer online, mobile and SMS banking. You can apply for a loan via its website.

Despite the recent growth in credit unions nationally, Joan Driscoll, a senior account manager at LMCU, feels there is still work to be done: “People don’t seem to know about credit unions, it’s difficult to get the message across,” she says, acknowledging the temptations of “pay weekly shops” that can coax anyone into taking out risky, high-interest loans – often leaving their finances worse off as a result.

“We’re trying to get people to stop using the pay-weekly shops like BrightHouse. A washing machine can end up costing you thousands of pounds.”

With critics suggesting that some pay-weekly shops are targeting vulnerable customers with high-interest loans, the Financial Conduct Authority that regulates the finance industry recently announced that it will introduce measures such as a cap on the cost of credit, with the aim of preventing crippling debt.

Close to 300,000 people are currently in debt to pay-weekly shops. Driscoll believes this number can be reduced – with education at the forefront of her mind.

She believes firmly that the work should begin in schools. “We’re doing a lot of work with Lifesavers, an initiative set up by the Church of England, and we also do our own ‘school collection schemes’. Children can come in and learn how they can save with the credit union and take turns to act as tellers and they really learn what money’s all about.”

While these programmes mostly focus on basic financial education for primary pupils, Driscoll feels that this basic knowledge must be expanded as children approach secondary school and beyond. This would help to ward off the startling discoveries about the sometimes-unforgiving financial world that many of us encounter later in life.

“Once you are older, it’s important to know about how to keep a good credit score and even why it is important,” she says. “We see people with silly things on their credit rating, like a £200 phone bill they’ve not paid.” She says LMCU would understand that – “But if they’re trying to get credit somewhere else, it likely won’t be the same.”

With 3,400 junior members whose collected savings total over £800,000, LMCU is striving to nurture a new generation into responsible, educated saving habits. New “teen accounts” are also in a trial period at the union.

Another potential benefit of signing up to a credit union like LMCU is that its non-profit status enables it to deliver surpluses back to their members through dividends.

This ensures that, whether your savings are big or small, there is potential for members to spark economic growth – becoming better off together as a community. “Every single loan – whether you are on universal credit, or earning £100,000 a year – is looked at individually,” says Driscoll. “Credit unions are for everyone – not just if you are in financial need or on benefits.”

If you live, work, study or volunteer in the boroughs of Lambeth, Southwark, Westminster or Camden, you are eligible to join LMCU as a member. You can drop by its office at 10 Acre Lane, SW2 5SG to speak with the team there. You can also visit its website at www.creditunion.co.uk.