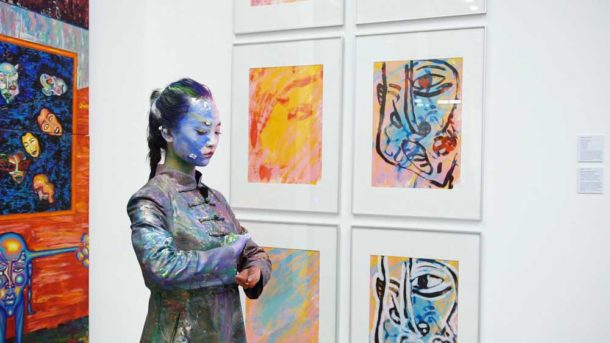 Brixton Village’s Studio 73 has built a reputation showcasing influential artists in the London arts scene and stocks a wide range of affordable art.

The latest artist to be promoted in the #73 lates series is Reggy Liu. The show opened with a pop up exhibition and evening of interactive performance and runs till Sunday 26 August.

Reggy (Tong) Liu is a London based fine artist, who recently graduated from Central Saint Martins and has taken part in several group exhibitions at Crypt Gallery, Imperial College and Tate Modern, as well as two solo shows in Marylebone and Knightsbridge.

Reggy is presenting “Becoming. Being Present with Time”, an exhibition exploring the journey of the self throughout time. The show is in two parts:

African Inspiration, a series of screen prints which can be interpreted differently according to the viewer’s idea.

Generating Energy, part of a series of interactive experimental performance named “Meet Future You and Future Self”.