The organiser of Brixton’s Urban Art show, a regular local summer event that attracts thousands of visitors, has accused Lambeth council of “knocking the spirit out of its community” by imposing charges and conditions on an event that has been raising thousands of pounds for local charities since 2002.

Tim Sutton, the event organiser for Urban Art, said that Event Lambeth (the council’s body to “co-ordinate and manage all street parties and street events”) had demanded a fee of £1,152.50 for a street trading licence covering five streets.

It had also demanded a long list of documentation, including evidence of the organisers’ “engagement with local residents” – that Tim Sutton said had been carried out in February – a more “detailed site map” of the event even though it takes place on a single street, and “a comprehensive event management plan” that must include

After protests, Event Lambeth reduced the fee to £471 covering two streets. The numbering for Helix Gardens starts in the middle of Josephine Avenue, but the show occupies just a single stretch of road.

Last year Urban Art  reluctantly decided to cancel its very popular Street Art area due to an increase in Lambeth road closure fees from £1,300 to over £2,000. Brixton Business Initiative District (BID) had offered to pay this year, but the Urban Art organisers will need time to rebuild new links with suppliers and supporters that have now been lost.

This year’s event will still go ahead on 14 and 15 July (Saturday has sold out, but there are still a few places left for exhibitors on Sunday). However, Tim Sutton is calling on Lambeth councillors and local MP Chuka Umunna to step in so that the event can go ahead in the future.

“At the moment it seems Lambeth are intent on squeezing every last penny out of the community it claims to support,” he said. “The fact that a fund-raising event is being charged anything at all is a disgrace. To impose business models on voluntary led events is not realistic”

Tim Sutton said: “Lambeth is knocking the spirit out of its own community. This is yet another kick in the teeth to all our volunteers, artists and visitors. The council should be ashamed.” 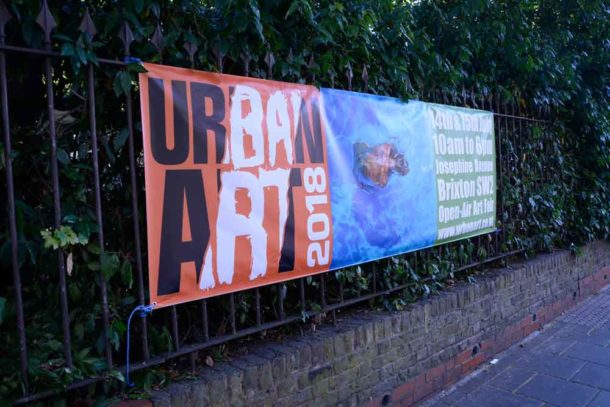 Urban Art stands out among the many events that boost Brixton’s attraction to tourists and the threat to its continued existence from fees and heavy handed bureaucracy comes as a major drive to promote Brixton as a tourist attraction is launched by the Brixton Business Improvement District.

It has raised funds for the local community over its 17 years. This year’s beneficiaries will be Holy Trinity School, Jubilee Primary School, Southside Rehabilitation project and the Anchor Group. The show’s charity partners provide the marshals during the weekend and get a percentage of sales made.

More than 1,000 works from over 100 artists are due to be on display. They range from the novice to the established. They start at less than £10 and can reach more than £1,000 but, whatever the price, the show is a great opportunity to buy direct from a wide range of artists including painters, printmakers, street artists, photographers and mixed media. You can see examples at the Urban Art.

Half Lambeth residents have one jab, one third two as Covid...