A COACH of a football project founded on a Brixton council estate has become the new joint manager of Tooting and Mitcham. Ashley Bosah, 31, who coached at the St Matthew’s Project for a decade, will oversee Dulwich Hamlet’s old rivals when they begin next season in the Bostik South Central Division.

Bosah, who has been involved with the South London side for eight years, was hired to take on the role following the departure of Frank Wilson the club’s former manager. Wilson and the club, who currently share their home ground with Dulwich Hamlet, decided to part ways in May this year following their relegation from the Bostik Premier division. 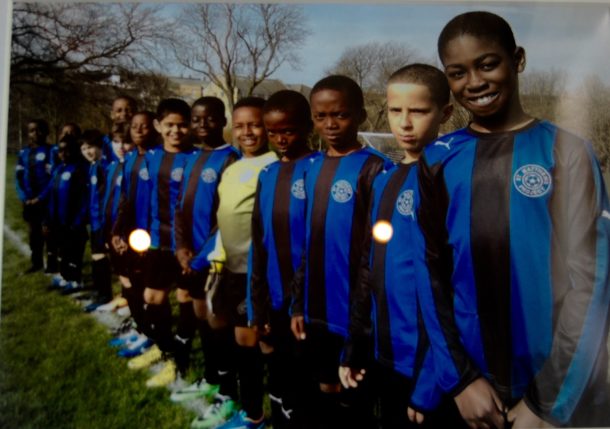 Bosah’s appointment as manager, alongside Cornelius Nwadialor, coincides with the Terrors’ decision to introduce a new football philosophy at the club. Their new approach will be based on fast-passing team play and youth development system Bosah and Nwadialor have helped to embed.

Speaking to Brixton Blog about his new role and the club’s relegation Bosah, said: “It’s a great pleasure to lead the first team and have the capacity to lead the younger teams. The senior team we will be managing next season are fairly young. The average age is 20 to 24. We have five or six players who are 26 to 30, but the majority of our team aged under-25.

“Some of these boys have their dreams and ambitions, so it’s good to be in a position to help get them through the club and give them opportunities at a higher level.

“It was a massive disappointment to get relegated last season, but that was the situation we found ourselves in. I feel we just didn’t have the quality to maintain our league standing.

“Right now it’s a rebuilding process for us and seeing if we can achieve the successes we had previously so we can get ourselves back up into that level of football again. We want to push ourselves and challenge for a play-off position, but we have to take things game by game.”

Bosah, whose side will face Northwood away in their first game in the Bostik South Central Division in August, has bolstered Tooting’s attacking options with some new faces and some old ones. The manager, who shared details of the club’s new player additions exclusively with Brixton Blog, welcomed the purchase of Omari-Delgado from Greenwich Borough and the return of former Terrors striker Billy Dunn.

“We’ll also be drawing on the experience of Billy Dunn who was here previously and scored 30 plus goals. Both have been training with us in the pre-season and we are drawing on their expertise.”

Bosah, who helped build community links between Tooting and Mitcham and St Matthew’s, alongside the project’s founder Lee Dema, had initially been overseeing the South London side’s football academy. The grassroots partnership between the Brixton-based project and the club has led to five of St Matthew’s former members joining Tooting’s youth teams over the past two years. This includes midfielder Dominic Morgan-Griffiths.

Morgan-Griffiths, 19, who is now a member of the club’s senior team said: “I feel good about being here and being a part of Tooting and Mitcham. My hope is they can push me so I can make it as a pro. I feel the club is the right environment for me to pursue my dream.”

Club Secretary Jackie Watkins praised the links between St Matthew’s and the club and the ‘safe space’ for young players the partnership has helped to create.

Ms. Watkins said: “At Tooting and Mitcham we consider ourselves very, very lucky because we have Lee (Dema) coaching some fantastic players who we poach and bring into our first team and we also have Ashley.

“When Ashley came from St Matthew’s it was difficult for him to initially leave them because he was volunteering there, but he came and everybody here at the club is proud of his progression.

Bosah added: “The club’s chairman and secretary are committed to our vision for the team and what we are trying to do behind the scenes. They want to see a pipeline of players come through from our academy.”