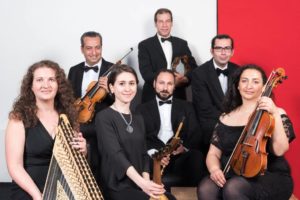 On 23 June 2018 the London Syrian Ensemble will be holding a fundraising concert ‘Sounds for Syria,’ at Conway Hall to mark Refugee Week. All proceeds from the concert will go to the Brixton based charity The Marhabtayn Trust, which many Brixton residents are familiar with through the Syrian Supper Clubs

The London Syrian Ensemble is a collective of some of the Damascus Conservatoire’s finest musicians, now based in the UK. Conway Hall has donated its historic wood-panelled hall in Holborn.

The proceeds will go to Marhabtayn’s partners: community groups working in Lebanon and Syria, providing assistance to people in need.
Marhabtayn is a charity run by Londoners – both Syrian and non-Syrian – working to show solidarity with people caught up in Syria’s conflict and refugee crisis. It sends grants to people and groups who need money todeal with some of Syria’s many enormous personal tragedies – disability, displacement, detention, siege and family crises.