A cycling record set in Herne Hill Velodrome in 1891 – the year it opened – will be under threat at the World Cycling Revival festival that takes place there next month.

Scottish cyclist Mark Beaumont is in training for the R. White’s Lemonade penny-farthing one-hour world record which will be part of the festival.

The current English record was set in 1891 at the velodrome and stands at 21 miles and 180 yards. 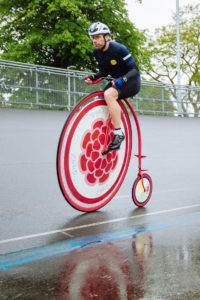 Beaumont, who holds the record for cycling 18,000 miles around the world, will join other penny-farthing professionals hoping to beat the 22 miles and 150 yards world record, which was set by W A Rowe in Massachusetts, USA, in 1886.

“I’ve taken on some crazy challenges in my career, but the R. White’s lemonade world record is certainly the quirkiest to date,” he said during a training session at the velodrome.

“Training for a 23-and-a-half-mile one-hour dash is one thing – but doing that on a penny-farthing is barmy.”

The lemonade brand – which began life close to the velodrome – is the official soft drink sponsor of the festival, celebrating a Victorian heritage dating back to 1845.

Working with the official Penny Farthing Club, R. White’s will champion all penny-farthing activities over the three-day (June 14 to 16) cycling festival. Visitors will be able to enjoy complimentary taster rides and a free lemonade.

Robert and Matthew White made the first R. White’s lemonade in Camberwell in 1845. The company was taken over by Whitbread in the 1960s and became part of Britvic in 1986.

Older readers may remember the firm’s “Secret Lemonade Drinker” advertising campaign, which aired for the first time in 1973 and continued for 11 years.