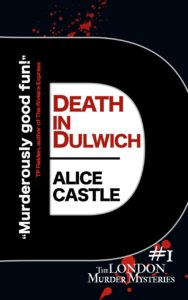 We caught up on a sunny Wednesday at Dulwich Books on Croxted Road, ahead of their event: Life and Death in Dulwich With Alice Castle that evening.

So, what is it about this part of South London that you think has inspired so many people?

It’s an interesting conundrum because it’s such a beautiful place, it’s a fantastic façade and seeing a lovely façade always makes me wonder what’s underneath it and I’m sure I’m not alone in that.

I think that’s partly because the Dulwich Estate has had a very strong role in keeping the place unchanged, unlike the rest of south London.

Dulwich has hardly changed at all. Yu can look at the old photos from 100 years ago anyway and see that it’s pretty much the same. !I think that strict, strict control has been a factor in allowing people to think about things and let people’s imaginations run to dark, dark corners.

Edward Alleyn, who bought Dulwich in 1605, was a sort of raffish character. He ran brothels and did bear-baiting and that’s where he made his money. We think of him as this very sedate Shakespearean actor but, actually, he was into all sorts of stuff and had a lot of fingers in lots of pies and that brought a lot of like minded people to the area.

You’ve got this unchanging, tranquil scene and a lot of creative, experimental, people and that sort of juxtaposition has made people think about crime. It’s bizarre but there have been so many crime writers: Raymond Chandler; Simon Brett, who went to Alleyn’s School, has written about 200 crime novels; P G Wodehouse, though not a strict crime writer as it were … his character Bertie Wooster was always up to some sort of crime, breaking into stately homes or nicking policemen’s helmets; Enid Blyton was born here and she wrote at least two series all about crimes, the Famous Five and the Secret Seven spend every summer holiday unmasking foreigners who’ve done terrible things!

Even Charles Dickens – who didn’t live here but used to come here a lot and drink in the Greyhound in the village – he used to write a lot about the Victorian crime scene, particularly in books like Oliver Twist with Fagin and the pickpockets. All that is very, very accurately written, I did history at university and I specialised in the Victorian city; his descriptions of the gangs of pic pockets are completely spot on. so he did do his research.

I think it’s a strange and interesting little quirk that people think about crime while sitting here looking at the picturesque windows and wondering what’s behind the façade.

I read that you’re a fan of Agatha and the titles of your London Murder Mystery series are quite Christie-esque; how do you feel about her legacy for women crime writers in the 21st century?

Well I think she was a mould breaker. She had a very long run as being hugely successful, her first book was stratospherically successful and, if you read it now, it’s still very surprising. I think she did lay the path open to other women crime writers and then it became this amazing era where you had people like D L Sayers and Majorie Allingham and Ngaio Marsh taking up the baton, pushing the crime genre into all these psychological areas and literary fiction like The Tiger in the Smoke – it’s a very beautifully written book.

Agatha Christie is often criticised for having quite “cardboardy” characters, but we still love her plots. I wouldn’t say that she’s like Shakespeare, but, in the way that her plots can be reinterpreted, she is slightly similar; the mechanics of the plots are amazing really. You can play them in all different ways.

You may hate her individual books and think some of her plot devices, you know, unexpected twins or whatever, are a bit hackneyed, but she has some real gems in there. She had a lithium poisoning, for instance, years before Litvinenko so she was way ahead of her time in many ways.

What do you see as the differences between women crime writers and your male counterparts?

I don’t know. I think the trite thing to say would be that women don’t write such violent stories but that’s not true, they write some really horrible stories!

I think there’s a kind of cold gaze that women sometimes have that people can find disconcerting. I think men, this is a terrible generalisation, but I think men are maybe more concerned with keeping the action moving forward, the page is turning because stuff is happening whereas sometimes it’s quite nice to dwell on the why. I don’t know, maybe women are very good at “whydunnits”.

Do you see yourself in your lead character Beth and, if not, has it been tempting to put any of yourself in that character?

I think people always presume that your lead character is you to some extent so I’ve been quite careful to make sure that she’s quite different. She’s 20 years younger than me, she’s a single mother, she’s got a fringe!

I think the main difference is that she’s a lot braver. She’s not reckless exactly, but when she’s in the middle of a case or something she’ll throw herself into danger which I’d never do! I watch a thriller and somebody’s going down into the cellar with a torch that’s running out I think “no don’t do it! Turn around!” But Beth would definitely go into the cellar, so I think, in a way, there’s a bit of wish fulfilment in her character in that she is so brave, she does venture more and I think “good on her!”

But at the same time, she’s got a lot of self-doubt so I hope she’s sort of relatable to most women; wracked with doubt about what they’re wearing to have they screwed up their children? Never ends really does it.

As a seasoned journalist what, if any, real-life crimes have crept their way into your books?

One book is based on an actual crime which caught my eye because it was just such a sad story. I’m always looking out for weird deaths. That sounds awful, but there’s plenty out there that’s actually happening, you don’t need to search for terribly clever plot devices because it’s out there.

How many more locations have you got in the pipeline for the series?

Well Homicide in Herne Hill is coming out this winter and then the next one will be in Peckham Rye and then I’m thinking of Streatham after that.

What advice would you give to people who think they have a really good story and it’s a case of turning that story into a book?

Just do it. Just start and see where you get to. It could take a long time or it could just flow. But you never know unless you give it a go.

Before turning to crime, Alice Castle was a UK newspaper journalist for The Daily Express, The Times and The Daily Telegraph. Her first book, Hot Chocolate, set in Brussels and London, was a European hit and sold out in two weeks.

Death in Dulwich was published in September 2017 and has been a number one best-seller in the UK, US, Canada, France, Spain and Germany. A sequel, The Girl in the Gallery was published in December 2017 to critical acclaim. Calamity in Camberwell, the third book in the London Murder Mystery series, will be published this summer, with Homicide in Herne Hill due to follow in early 2019. Alice is currently working on the fifth London Murder Mystery adventure. Once again, it will feature Beth Haldane and DI Harry York.

She lives in South London and is married with two children, two step-children and two cats.