Campaigners yesterday (4 February) called on Lambeth council to halt work on the Network Rail arches in Brixton, while some of the original traders who were forced to leave the arches but are now planning to return, appealed for it to proceed as quickly as possible.

A protest on Brixton Station Road marked the three years of blight on the town as a place to shop caused by Network Rail’s plans for the arches.

Our Brixton, a “multi-arts campaign” linked to Reclaim Brixton, organised a show of posters highlighting concerns about the refurbishment that was due to begin today that have been raised by local planning expert Nick Lewis.

More than 50 people linked hands in a symbolic human chain and observed three minutes of silence outside the arches.

Activist rapper Potent Whisper told the protest that the “construction environmental management plan”, approved by Lambeth council’s planning committee in June last year but only finalised in December, would protect only the workers on the site.

He said that it left fire risks because there would be “almost no access” to the site and that noxious substances from the work made it hard to imagine how street traders would be able to continue trading. There was also a threat to children in a crèche in the Rec.

“This is a disaster waiting to happen,” he said, demanding that Lambeth council “step up and enforce their planning permission”.

Nick Lewis said that fire safety precautions were “woefully inadequate” and that measures to control levels of dust, noise and vibration were “almost comical”.

He said “toxic dust” that might contain asbestos could “place most of the local community in jeopardy”.

A council spokesman said: “Network Rail is aware of its obligations in relation to these works, and is legally obliged to meet them. Lambeth council will ensure they comply.”

Matthew Ball, senior external affairs manager for Network Rail, said: “Our priority is completing the work required on time in order that that the majority of our former tenants can return to a completed arch as soon as possible.

“We worked closely with Lambeth council to meet their planning conditions and we will work safely and mindful of the local community to deliver this scheme as quickly as possible, to allow our former tenants to return.

“Several of these tenants have relocated elsewhere during the scheme with financial assistance from Network Rail.

“At Network Rail, safety is paramount – the safety of passengers and other members of the public using our infrastructure, the safety of our employees and safety in our partnerships.

“We have significant experience of delivering schemes across the country and will be complying with the terms of the planning permission, particularly in respect of ensuring the safety of our contractors, traders and the community.

“This includes appropriate fire safety, vehicle management and dust control, all of which has been scrutinised and approved by Lambeth Council.

“Asbestos removal has already been undertaken in the vacated arches without incident.

“Representatives of the Brixton BID, the Brixton Society and local councillors were invited on site during the enabling works to view the work undertaken for themselves.

“Our returning tenants will pay stepped rents over seven years, meaning that they will only be paying 2015 market rents in 2025.”

Network Rail has announced that it is to sell all of its property holdings, specifically mentioning its arches, to finance necessary improvements in railway infrastructure.

When it was a public company it planned to finance the work through borrowing, but when it was taken back under government control this was no longer possible.

It had claimed that the long delays in starting work on refurbishment was due to the refusal of three traders to leave the arches they occupy and a court case they plan to bring.

But speakers at the protest pointed out that the work will go on while a betting shop and pawnbrokers remain in place in the arches.

One of the remaining traders, Ray Murphy of Budget Carpets, told the Blog that there was no date yet for the planned court case which, earlier, was said to have been scheduled for December or January.

Several traders who have reached agreement with Network Rail on returning to the arches are becoming increasingly concerned and frustrated at the delays and have appealed for work to be completed as soon as possible.

Two of them attended the last meeting of the Brixton Neighbourhood Forum to appeal for further public objections to the work to be kept to a minimum so that it can proceed without further delay.

Mohamed Kheddache, owner of Café Rio, one of the traders who is planning to return, said: “It’s great news that the work is finally starting – the wait has been extremely stressful for all the traders who are coming back. 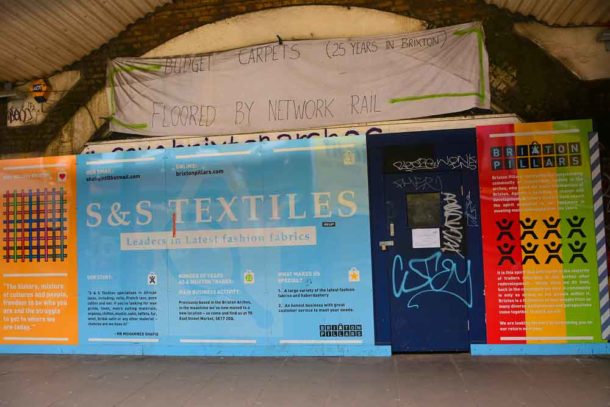 “We are so grateful to the community for supporting us this far, but we are worried that some people will continue to raise objections to the construction and cause further delays.

“I really don’t know what they want to achieve by this now.

“The job is going to be done and we, the traders, need it to happen sooner, not later – we have waited long enough.”

Nine of the original traders are planning to return and negotiations are still going on with some who had been sub-letting from primary leaseholders.

Atlantic Road scaffolding there until Christmas

SAVE OUR SHOPS: what are Network Rail’s plans for the arches?