Brixton residents father and son Jerome and Nando Lewis joined Pure Underwater Rugby England (PURE) in 2013 after stumbling across a newspaper article about the newly established club in Putney, the first in the country.

Nando was a keen rugby player at school but injuries prevented him playing longer. Despite this, both he and Jerome found a new love for spearfishing and freediving and, as a result, they believed underwater rugby would be great off-sea practice.

“What I love is that I can now play a proper physical sport again and not get injured,” says Nando.

PURE is a mixed club with around 20 active members aged between 19 to 68. They play for an hour on Thursday evenings in Putney Leisure Centre’s deep pool. The depth is important as diving is a key aspect of the game. 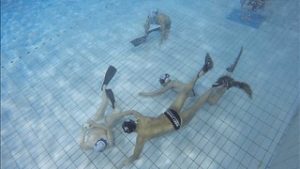 “It is a safe full-contact sport and the three dimensional element of it gives it a really challenging side, which for your spatial awareness is extraordinary,” says Jerome.

Players wear fins, a hat, mask and snorkel and the aim is to score a goal by getting a ball, weighted with salt water, into the opposition’s basket which is positioned on the pool floor at either end.

Matches are typically played in 15-minute halves. Both teams have six players in the water and six substitutes, alternating continuously. Jerome and Nando often partner up, knowing each other’s game well.

“You get a real high from it, I think that’s why people get addicted to the sport,” Jerome says.

As the only underwater rugby club in the UK it is difficult for PURE to play competitive matches on a regular basis.

But the club have had the opportunity to play competitively abroad, competing against the world’s best, Germany, Norway and Colombia.

In October this year Putney hosted the UK’s first ever international underwater rugby tournament which both Jerome and Nando took part in. 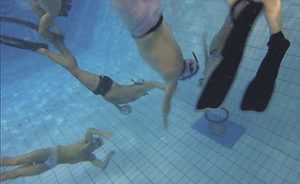 The club is now setting its sights on playing in the Champion’s Cup in Berlin next year and the world championships as Team GB in Austria in 2019.

Both Jerome and Nando would like to see more underwater rugby clubs in the UK and are keen to help anyone wishing to get started with the sport.

“The biggest barrier in the UK to setting up underwater rugby teams is getting pool time and affordable pool time,” Nando says.

Club member Raines Williams set up the first ladies underwater rugby club in Cheltenham just a few months ago and they too are hoping to participate in the world championships in 2019.

“We want to keep it fun. We’ve got a lot of members who did not play sport growing up and they’ve come to this as something new and really enjoyed it,” Nando says.

“Come and try it if you can swim, it may be hard at first, but there’s a very quick learning curve.”

Sessions take place on Thursday evenings from 9.30pm to 10.30pm at Putney Leisure Centre. The first session is free. For more details visit the website: pureunderwaterrugby.com.

PURE is part of the British Sub-Aqua Club – the national governing body for scuba diving – with 28,000 members, 120 dive centres and more than 900 clubs run by volunteers. www.bsac.com.