Workers at Brixton’s Ritzy cinema and others in the Picturehouse chain who have been campaigning to be paid the official Living Wage are to defy a threat to sack all of them who take part in planned legal strike action this week.

The threat came in a letter to the union BECTU that represents Picturehouse staff.

Its members at the chain recently voted – as they were forced to by Britain’s harsh employment laws – to renew their legal right to strike.

The planned new strikes would cause severe disruption to the London Film Festival which takes place from 4 to 15 October.

The Ritzy was closed by a strike during last year’s festival when it was due to host two festival screenings.

Picturehouse Central in London’s West End and Hackney Picturehouse are host venues for the festival this year.

Workers from all five London sites involved in the campaign are due to strike this Wednesday (4 October) and join a demonstration in Leicester Square during the opening gala of the festival.

As well as the Living Wage, the campaign is for sick pay, maternity pay and union recognition.

Three Ritzy union reps have already been sacked by Picturehouse. Their union is supporting an employment tribunal case to get their jobs back.

Shadow chancellor John McDonnell took part in a July rally outside the Ritzy to support the sacked workers and their campaigns and many leading actors and directors are backing the call for a boycott of Picturehouse cinemas.

The company uses a mathematical trick to get round this. Its calculations ignore paid breaks – contrary to Living Wage Foundation guidance, as BECTU has pointed out to the chain.

Even if these calculations were valid, they would not represent a continuous commitment to pay a Living Wage, BECTU says.

Neither do the Picturehouse letters address any of the other reasons for the strike – including sick pay, union recognition and maternity/paternity pay.

Obi Saiq, a striker at Hackney Picturehouse, said: “We are striking for a wage that we can live on and for basic rights at work. Until Picturehouse negotiates with us – which they haven’t done in over a year of strike action – we have no choice but to fight.

“Our strike action will go ahead and we expect to significantly disrupt the London Film Festival.”

Nesa Kelmendi, a striker at Picturehouse Central, said: “These threats would be hilarious if they weren’t outrageous and cynical.

“We’re told we’re already paid the living wage – but how can that possibly be true when we’ve already been on strike for a living wage for over a year?

“I and other workers won’t be deterred by cynical legal letters. I am much more scared of poverty pay, and having to choose between food and heating.”

BECTU general secretary Gerry Morrissey said: “Picturehouse management know they have no legal grounds to stop the proposed strike action during the London Film Festival and have now resorted to threatening their own staff. We will not be bullied and we will robustly defend any legal action.

“If Picturehouse management are confident that they are paying the living wage, why have they not signed up as a living wage employer? We challenge them to do so.”

Picturehouse is part of the giant international chain Cineworld, which had after-tax profits of £93.8 million last year, 18.3% up on 2015.

Mooky Greidinger, Cineworld’s chief executive officer, said in the company’s annual report that 2016 was “another record year” for the group and spoke of its “gratifying operating performance”.

Chairman Anthony Bloom opened his report by saying that: “The wellbeing of our staff is fundamental to the efficient operation of the business”.

He also said that: “We have a strong balance sheet and can undertake our strategic objectives without financial strain”.

Workers at Brixton Ritzy began campaigning to be paid the London Living Wage in 2014 and successfully fought off a bid to make many of them redundant after reaching agreement with Picturehouse on pay. The agreement was supposed to lead to talks to achieve the full London Living Wage. The campaign began again last year,

Lambeth council began talking to Picturehouse about a new cinema at the Nettlefold Hall site in West Norwood in 2012 and eventually agreed to a joint development of the site, contributing at least £3.4 million towards an estimated total cost of £5,733.000.

In a report dated 17 December 2014, the council noted that “Staff at the Ritzy cinema have been engaged in a long running dispute with Picturehouse regarding London Living Wage. The dispute was resolved but subsequent proposals for restructuring of the staffing led to further dispute.

“The council has negotiated with the Picturehouse that, in line with council policy, staff employed by the Picturehouse for the West Norwood cinema would be paid the equivalent of London Living Wage.

“Negotiations to strengthen this commitment will continue once it is known whether agreement to proceed to construction has been given.”

In March last year another council report setting out the details of the agreement said that the joint project supported the council’s social value framework, with agreement with Picturehouse including the London Living Wage. 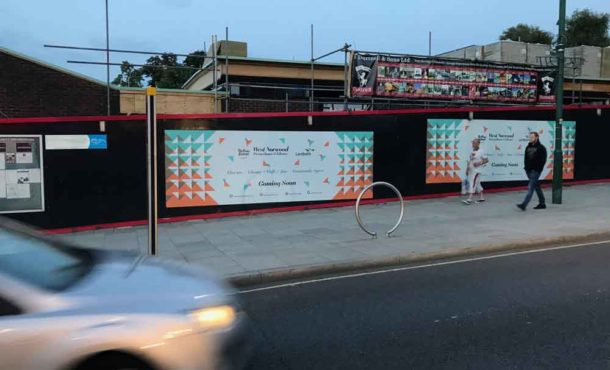 Construction has now begun at the site.

Ritzy owner to spend £2.7 billion, but will not pay living...