Newer additions to Brixton’s music scene may sometimes get more publicity, but there’s one local venue that sets the benchmark for live performance – and has done for many years – The Windmill. 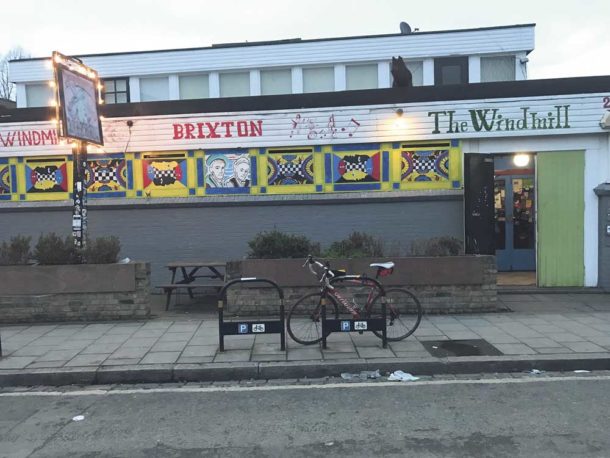 A 10-minute stroll from the bright lights and cocktail bars of Coldharbour Lane, the façade of The Windmill, down a side road off Brixton Hill, has barely changed since the 1970s when it was built as a local boozer for the Blenheim Gardens estate.

In the 15-odd years that band booker Tim Perry has worked there its stage has been trodden by the likes of The Vaccines, The War on Drugs, The Wombats and countless others. Friendly, informal and independent, the 150-capacity venue has long been known for its dedication to off-beat programming and breaking some of the best new acts coming out of South London. Time Out named it one of the best music venues in the city – not that the Windmill is fazed by this accolade.

“People have always travelled to this venue to see the bands they like and the people they know, it’s never been people just randomly coming in,” explains Tim. “Because of the programming that we do, it’s a lot of new bands, and it’s quite niche, so we’ve not really gone down the populist route.”

Tim himself started off as a travel and music journalist in the nineties, when new consumer websites looking for content made it a lucrative business. “I probably had too much money, got too drunk and ended up here,” he admits. At the time, Tim was running a night at the much-missed Brady’s (The Railway Hotel) on Atlantic Road – now Wahaca. It was a niche night out, an event that fused country music and hip-hop in a mix of live acts and DJ sets, but fans of both genres came from all over London.

When Brady’s closed at the turn of the millennium, Tim took the night to the Windmill, making a success of the difficult Sunday evening slot. Then, when the former booker vacated his post, Tim stepped up to the plate. “I tried to carry on doing writing as well, but it got a bit all-consuming, and this was more fun than sitting at home writing all day.” Since then, Tim has helped shape The Windmill into what it is now, a place known for its eclectic mix of upcoming new acts, local favourites and cult figures.

The pub’s profile has continued to rise steadily, attracting a new group of regulars to the venue. “There’s been an outbreak of really good bands from South London, who are between 17 and 21. It’s become a younger crowd because the bands are getting younger.” Postpunk experimentalists like HMLTD, along with Windmill mainstays Shame and Goat Girl, are some of the big names in what is being touted as the new “South London scene”. Tim is quick to recommend others causing a stir.

His personal tips are Croydon 17-year-olds, Black MIDI, and Peckham sisters Waterbaby, both of whom have played the majority of what few shows they’ve done on the Windmill stage. “We kept telling them to come back,” says Tim, “and now everyone wants to book them. A lot of venues forget that you need to curate or incubate bands, and I think it’s important to have a stamp and go, ‘you’re identifying with this venue’.”

Nevertheless, Tim isn’t one to take the “new is always better” tack. “It’s also important to have a bit of variety,” he says, “I think if you keep going for the scuzzy, new, 21-year-old post-punk bands, that’s going to dry up in a year.”

In June, the Windmill hosted a month-long residency from cult country musician Ben Wallers, aka The Rebel, which featured support from Goat Girl and Fat White Family’s Saul Adamczewski, among others. The success of the shows led Tim and the rest of the Windmill crew to announce a second Rebel Residency scheduled for June 2018.

The venue has been an essential stepping stone for many other local acts – bands like Meatraffle and Phobophobes still play regularly, and Saul Adamczewski premiered his new outfit Insecure Men there back in January, along with an assortment of band members including Sean Lennon and Childhood’s Ben Romans-Hopcraft. “Venues should get recognised for what they can do for people’s career, and for the community,” says Tim, “so there’s always somewhere for people to go, and somewhere that is committed to live music, rather than just putting on what they think will make money.”