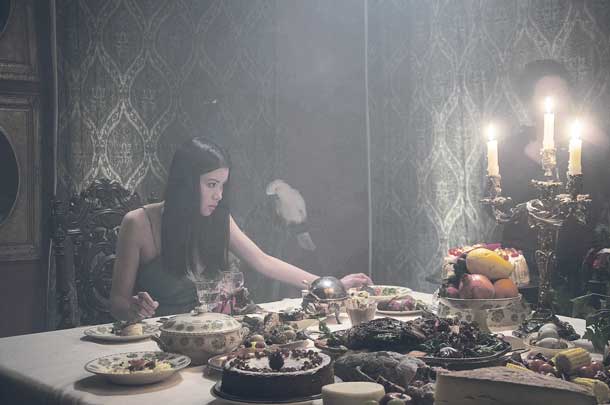 The Feast, a new short film, is a story of power, abuse and hunger. It will be privately screened in September and is definitely one you should look out for when it’s released.

Not least because Brixton restaurateur and all-round foodie guru Spyros Parrisis, who runs Parrisi on Atlantic Road, provides the food and its lavish styling.

London-based producer, writer and director Gaëlle Mourre, who works on international film projects and co-producer Michelle Fan, who has also produced films in New York, Shanghai, and northern India, had a brilliant time working with Spyros on the project.

Mourre says: “Michelle and I were looking for a chef and food stylist when Melonie Gault, a mutual friend of mine and Spyros, introduced us and let us take it from there. Working with Spyros was wonderful, I knew the feast scene was in very good hands as soon as he took the project on.” 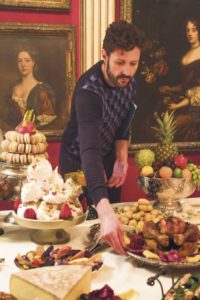 Spyros says he had a lot of fun working on The Feast. “It was definitely full on in terms of food production, as everything on the table was real food, but working with Michelle and Gaëlle felt so easy and natural. I felt I knew exactly what they needed for The Feast and I loved envisaging, planning and producing for the project.

“Although a film set is a fairly new direction, and one that I always wanted to try, it felt very natural to me and I would definitely like to do many more projects like that.

“I really enjoy the artistic side of food presentation and the research in finding the appropriate food genre and style of presentation. I find it quite thrilling.”

Starring Katie Leung (Cho Chang in the Harry Potter series), The Feast is based on a short story by L.P. Lee, whose short stories have featured in magazines and anthologies including Popshot and Best New Horror.

An aristocrat who presides over an impoverished community invites one person each month to dine with him in his mansion.

They come, but return home changed …

The film focuses on Hayley and her visit (above). Played by Katie Leung, she’s hard-headed and self-possessed – but can she satiate her hunger without sacrificing what he’s intent on taking?

The film’s climactic scene involves a lavish display of food, made and styled by Spyros.

The producers will be submitting the film to festivals and you can follow their news at www.thefeastfilm.com.