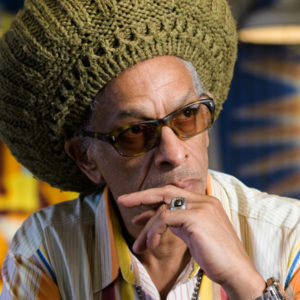 (Sponsored post)
It is generally agreed that iconic punk reggae DJ Don Letts is the man who single handedly turned a whole generation of punks onto reggae back in the 70s and 80s.

Now Don has got together with Brixton’s Turtle Bay who have commissioned him to create a one-off collection of podcasts exploring the history of reggae through his unique lens.

There are four Reggae 45 Podcasts each concentrating on a different area of Don’s musical history:

The podcasts are available for free right now on the Turtle Bay website and Turtle Bay Mixcloud Page, and will also be available on usual Apple/Android Podcast download sites.

Background : Don Letts’ influence on the punk scene began with Letts’ clothes shop, Acme Attractions on the Kings Road back in 1975. In a musical reverse of Malcolm Maclaren and Vivienne Westwood’s punk clothes shop SEX, it was the pumping dub reggae soundtrack that began to attract a mixed crowd including the Clash and the Sex Pistols. When Acme’s accountant Andrew Czezowski sensed the new mood needed a new venue he launched London’s first punk club, the Roxy, and he asked Don to DJ.

As Don wrote in the Guardian, ‘Punk was so new that none of the bands had actually released any records yet, so I ended up playing what I was into – reggae, especially dub. . . When the punk bands started to get deals and release singles, I started to slip ’em in, but the punks said I should just keep spinning the reggae.’

Dread Meets Punk Rockers Uptown, Don Letts’s compilation of music at the Roxy Club between December 1976 and April 1977, is now out on Social Classics (Heavenly Records).

Brixton Calling: Paying what you like at the B£ café