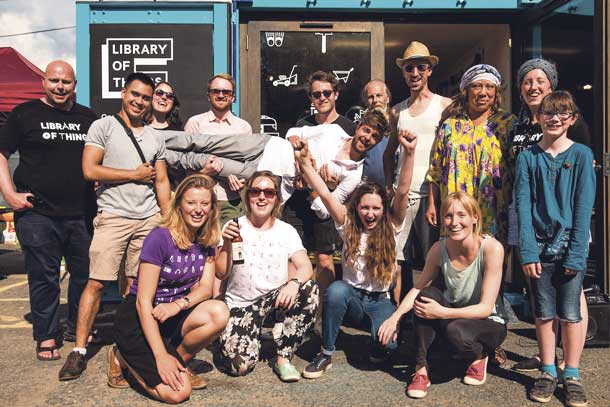 The Library of Things, a social enterprise based in West Norwood which allows people to borrow useful items cheaply, says the service is more popular than ever as it celebrates its one year anniversary.

A year after it opened its doors, co-founders Sophia Wyatt, Emma Shaw and Rebecca Trevalyan say people have been queueing up to borrow festival gear, gardening equipment and ukuleles.

The item lending service was launched in 2016 from a custom-made turquoise shipping container space on a car park in West Norwood.

Since then, the library has gained more than 500 members, who come to borrow a range of items and learn new skills. The community business passed 1,000 “lends” in April this year.

The most borrowed items so far are carpet cleaners, tents, drills, sewing machines, large music speakers and a pair of colourful ukuleles.

The library also includes a jerk chicken BBQ, a body board and a full golf set among its 346 items to borrow at “deliberately affordable prices”.

Business is so booming that the team have recruited a team of 14 local volunteers (above) and freelancers to run the service in exchange for being able to borrow for free.

Volunteer Oliver Kirkman said one of his highlights had been helping a member and his daughter pick the things they wanted for her first camping trip.

“Another moment was seeing the kid-like grin on two grown men’s faces as they walked out with the Nintendo 64,” he added.

Items are sourced directly from manufacturers and retailers. Cleaning product manufacturer Karcher has made donations, as have outdoor equipment companies Berghaus and Patagonia, and B&Q West Norwood.

Library of Things also wanted customers to learn new skills and meet one another.

“Repairing buttonless school shirts and holey socks is so much more fun with others there to help – and with a glass of wine in hand,” Jones said.

The social enterprise is also planning to run a series of DIY training events this summer, in partnership with B&Q West Norwood.