Nine boxers from Miguel’s Gym in Loughborough Junction will fight for the right to be crowned amateur champion at Europe’s largest amateur boxing event, the Haringey Box Cup, at Alexandra Palace 16-18 June.

24-year-old Ali Richards will be returning to the ring in the women’s 48kg category. The fighter’s performances over the past 12 months have seen her rank number three in England and earn a place in the national squad.

Club vice-capatain Kheron Kenardo will also be making his bow at the tournament, with the charismatic 25-year-old promising to put on an “Artful display of ass whooping”.

The heavyweight fighter, who is also a motivational speaker, credits boxing with keeping him off the street and is involved in a range of community work in South London.

Ricardo Powell from Croydon will also be competing in the heavyweight division. The 31-year old is aiming to go pro after the tournament and credits the coaches at Miguel’s Gym for his progress.

“I’ve been training four to five times a week,” said Powell. “These people have trained champions and have got 30 to 40 years of experience.” 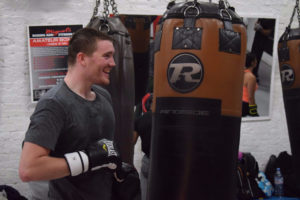 Under the leadership of Mike Burton, Chris Lodge and Granville Williams, Miguel’s Amateur Boxing Association Club has been gone from strength to strength in recent years, with nine fighters competing in the 2014-15 season, 12 last year and 19 this year in more than 60 bouts.

Tickets for the event are still available with Europe’s finest amateur talent on display in a tournament that has previously seen the likes of Anthony Joshua and Nicola Adams compete.

Brixton heavyweight on the comeback trail