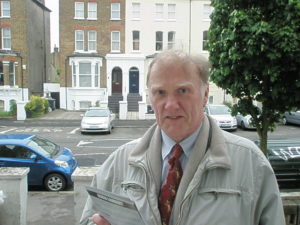 I have lived in the borough for 38 years however the expense of accommodation, I don’t think I could live in London if I was moving now.

I recycle 97% of my packaging, mostly from food, beer cans, clothes etc. Introduce 5% off Council Tax for good recycling. Penalties for fly tipping, which is a problem in Croydon. Build some public conveniences and 0.30p admission.

No membership of ‘Single Market’ – responsible for Diesel Omission scandal& Meat Scandal, favoured by lib-Lab-Con-Green Candidates. You cannot renationalise Royal Mail whilst in the EU, as we are subject to their procurement and competition laws.

3.2m EU citizens live here because the EU taxes more. They should be granted right to stay but unskilled EU & outside EU granted ”Temporary Visas”

1.2m UK citizens in EU countries half retired Should be allowed to Stay in reciprocal agreements. I lived in Finland 1975-76 people travelled around Europe before the EU inception. I have been Anti-Common market since 1972. Tony Benn inspired me.

No selection at 11.Fair school funding. Reintroduce polytechnics, abolished by John Major in 1990.They provided Sandwich courses, which meant student debt was less and vocational & Academic courses. No more selloff of playing fields.

If my home football side (Leicester) can win Premier league at 5,000/1 odd & get to European QF at 200/1 then voting for me will send a message to Westminster and the Political Class.