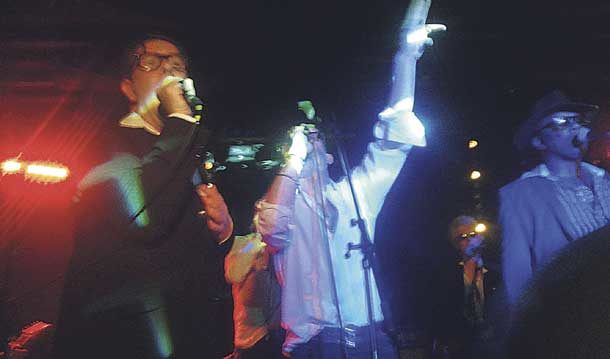 From that album, Woke Up This Morning, which plays over the opening credits of cult TV show The Sopranos, remains their best known song.

Alabama 3 (according to author Irvine Welsh), “turn a crazed mirror on the UK’s mainstream cultural influences, parodying derivative and genre-based music” through what the band call their “sweet acid country house music”, adding a gloriously unhealthy pinch of dirty rock’n’roll into the mix.

Frontman Larry Love is as cadaverous as ever, still looking as if a ray of sunlight will burn him alive.

Cohort Rev D Wayne Love, though, cuts a rather more substantial figure, suiting his pseudo preacher persona. Both are proper rock’n’roll stars who wear shades on stage, adding to the mystique but also covering a few under-eye bags at the same time.

Alabama 3 has had an ever changing roster of band members over the years, but original keyboard player Orlando (Spirit of Love) is still there.

Also present and delightfully politically correct is freestyler and vocalist Be Atwell (aka Reverend Be). Long-term collaborator and guitarist Mark Samms (Rock Freebase) and Nick Reynolds, a talented harmonica player and the son of a Great Train Robber, are also there.

The band grew organically out of its members’ acid house DJing activities. Back in the day they were doing a gig in Italy with two turntables, a load of acid house records and some obscure blues LPs. It was run by the Italian Communist Party, who said the band had to have a manifesto. Someone hastily tore a page from an Italian comic book and read it out. It started with: “The techno warriors will save the Martians”. The crowd loved it, and the rest is history.

That was a generation, 20 or so years, ago. The Alabama 3 were an integral part of my life as I eased myself into Brixton nightlife.

They made a video on the roof above my Brixton flat for Hypo Full of Love, complete with giant pink model of a syringe. Later encounters included raucous live shows in the then Brix in St Matthew’s and as far afield as Liverpool Royal Court, when Rev D Wayne managed to convince a few irate audience members that he was a bona fide preacher who had taken an erroneous moral path.

I remember with fondness the band’s takeover of HMV Records in the West End, with bemused shoppers looking on as dog-collar-wearing becloaked supporters preached to traffic police.

The stalwart party faithful (“party” being the operative word) are still a core following, albeit with a few more grey hairs, but now with the addition of an equally up-for-it new band of followers.

Back then, as now, we used to jump up and sing along, raising our left hands (yes left, not right!) in solidarity whenever iconic anthem Mao Tse Tung Said was played.

Today their music remains at once raw, catchily accessible and danceable as was apparent from the sold out, jam-packed gig at Brixton Jamm where they played old faves and new material from their current album Exile to Blues – Part Two.

Fans young and maturer, gathered in happy harmony to celebrate and pay homage to this ever-endearing collective of Brixton stalwarts, who willingly lower the tone and nip gentrification in the bud whenever they make an appearance back at their “spiritual home”.

Alabama 3’s current album Exile to Blues – Part Two (as well as their back catalogue) is available from alabama3.co.uk.