Swans have hatched cygnets in Brockwell Park for what is believed to be the first time in decades.

Local – and appropriately named –  photographer Samuel Hauenstein Swan has captured some of the seven youngsters.

“After the parents had been sitting on their eggs for the last five to six weeks, this morning I saw for the first time five cygnets in the swan’s nest,” he told the Blog.

“Mostly they hide under the wings of the parents. But if they appear from under the feathers, they are super cute. I’m looking forward to when they ride on their parents’ backs.

“Let’s hope cygnets will not fall prey to crows, herons, magpies or the dogs that are around in the park.

“The foxes should not get to them as the swans have been defending their island in the middle of the pond for weeks. As long as they stay there at night, I don’t think any fox will be swimming over.”

Another photographer captured the images below of the swans contesting the island with two Canada geese a few weeks ago.

Sam said the geese had successfully hatched four goslings, but the swan pair did not allow them to shelter on the island where they had their nest – the only one of any size and with enough vegetation to offer protection.

“Forced to overnight on the shore, the little goslings were easy prey to a fox,” he said. “In less than a week all but one chick had been killed, along with one of the parent birds.”

Rehabilitation if the park’s ponds took place some years ago. There had been plans to establish a bigger island on the top pond, but the programme was cut short. Sam said that, as a result, there is no shelter for breeding birds away from the sensitive noses of the park’s foxes. 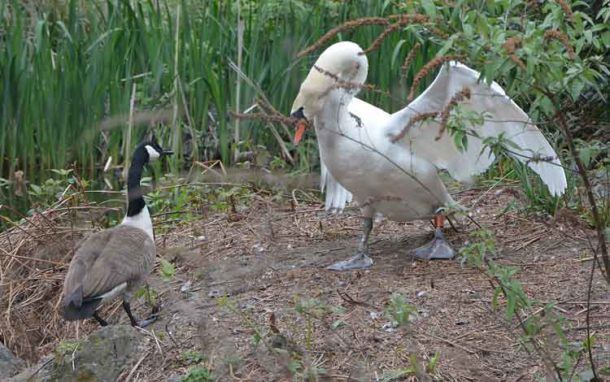 Wheels for Wellbeing looks for votes from Lambeth community