The gelaterias, boulangeries and French wine shops of East Dulwich echoed to chants of “The workers united will never be defeated”, as staff at a second local Picturehouse cinema joined the campaign for a living wage. 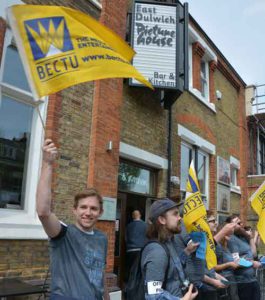 Backed by an array of political and community groups – and trade union solidarity in the form of a flag from the actors’ union Equity – strikers from the East Dulwich Picturehouse leafleted passers-by and cheered the honks of passing supporters.

They had walked out to be greeted by colleagues and workers from other London Picturehouse cinemas.

The campaign by members of the cinema workers’ BECTU section of the trade union Prospect began at Brixton’s Ritzy cinema in 2014.

Their strikes and the call for a boycott of cinemas belonging to Picturehouse and its owners Cineworld are backed by many stars.