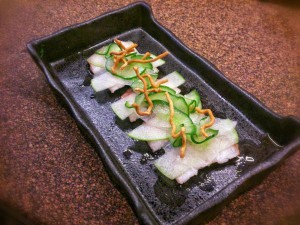 Nanban on Coldharbour Lane has introduced a new booking system that not only reduces the amount of “no-shows” (guests failing to honour a reservation) but raises money for a local charity. You secure your booking online with a £1 deposit, then choose whether to have it refunded after you have dined or donate it to Nanban’s chosen Brixton charity, the Mosaic Clubhouse. Nanban manager Mark Robertson, who devised the system, believes this is a first for restaurant reservations. The response to a pilot has been extremely positive with more than 98% of guests choosing to have their booking deposit donated. Nanban will be rolling out this system to sister companies Satay Bar and Market House, also on Coldharbour Lane. It will also make a matching donation for all those made by guests. For more information contact Mark at contact@studio120.co.uk.

Half Moon to reopen

Herne Hill’s Half Moon pub is to reopen after closing in August 2013 after a burst Thames Water pipe flooded the area. The Half Moon has hosted a string of famous acts in the past, including U2, Billy Bragg, and even an impromptu performance from Frank Sinatra. In March 2016, campaigners, local bands and Jo Brand put on a pop-up music festival to save the pub as a music venue described as a “hub of the community”. Jonathan Swaine, managing director for Fullers, which owns the pub said: “We are pinning everything on March 20 – as long as the gas installation goes smoothly.”

The Alkaline Juice Factory, Negril, Fish Lounge, F.Mondays and Kata Kata all got some publicity across the pond after the New York Times published a piece on Brixton Hill, the road “proving that cool doesn’t have to come with a high price tag”. The road is “successfully eschewing the onslaught of gentrification” of nearby Brixton Village with small, locally run businesses, the article says, although it notes that a spike in property prices can’t be far off …

Soul Food Sisters are bringing their European and Caribbean-inspired cooking to south London this March, with a kitchen residency at Clapham pub The King & Co. Launching on Monday 27 February and running daily until Sunday 2 April, the five-week pub popup will showcase the “duo’s much-loved fun fresh dishes influenced by Caribbean and European flavours”, as well as new Saturday brunch specials and Sunday roasts. 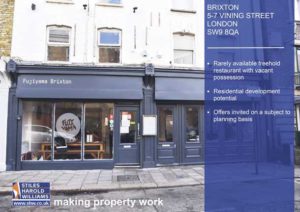 The building housing restaurant Fujiyama on Vining Street off Atlantic Road has been put up for sale for £2.1 million and could potentially be turned into flats. An advert for the restaurant on estate agency Stiles Harold Williams’ website says that there is scope for residential development with the potential for five flats with ground floor commercial space. If you’re a fan of their sushi better head there soon!

Brixton food entrepreneur Levi Roots has been announced as a speaker at a Caribbean food and drink conference on 18 August at Lambeth College in Brixton. It will be followed by Grace Foods’ Jus’ Caribbean festival on 19 and 20 August, which is in partnership with Lambeth council, the college and the Caribbean Tourism Organisation. Alongside the food on offer there will be a live band, comedy, cooking competitions, mixology contests, folk dancing and more entertainment.